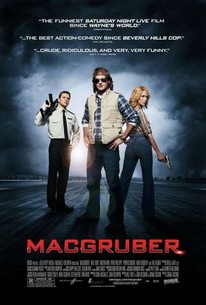 Critics Consensus: It too often mistakes shock value for real humor, but MacGruber is better than many SNL films -- and better than it probably should be.

Critics Consensus: It too often mistakes shock value for real humor, but MacGruber is better than many SNL films -- and better than it probably should be.

Critic Consensus: It too often mistakes shock value for real humor, but MacGruber is better than many SNL films -- and better than it probably should be.

Only one American hero has earned the rank of Green Beret, Navy SEAL and Army Ranger. Just one operative has been awarded 16 purple hearts, 3 Congressional Medals of Honor and 7 presidential medals of bravery. And only one guy is man enough to still sport a mullet. In the 10 years since his fiancée was killed, special op MacGruber has sworn off a life of fighting crime with his bare hands. But when he learns that his country needs him to find a nuclear warhead that's been stolen by his sworn enemy, Dieter Von Cunth, MacGruber figures he's the only one tough enough for the job. Assembling an elite team of experts--Lt. Dixon Piper and Vicki St. Elmo--MacGruber will navigate an army of assassins to hunt down Cunth and bring him to justice. His methods may be unorthodox. His crime scenes may get messy. But if you want the world saved right, you call in MacGruber.

Will Forte
as MacGruber

Chris Kittinger
as Man in Tuxedo

Mark Dimitrijevic
as Man in Café

Amare Stoudemire
as Himself

Edward A. Duran
as Compound Guard #1

MacGruber Is a Misunderstood Gem of a Cult Comedy
RT on DVD & Blu-Ray: MacGruber and Killers
Critics Consensus: Shrek‘s Final Chapter Is So-So

Kristen Wiig lends it a bit of class as the hero's moll, Vicki St Elmo, but Forte is a pain, the scatological crudity unrelenting, and the air of pointlessness unignorable.

An action-comedy-thriller (although the term "dud" is better), MacGruber is based on a recurring American Saturday Night Live sketch -- a joke funny for 20 seconds, but not 99 minutes.

Any fans of satire who haven't checked out MacGruber yet, prepare to be converted into believers like the man himself when he finally uses a gun for the first time.

After a few promising opening gags, inspiration soon begins to fizzle out; the film ends up looking less smart than the material it's supposed to be parodying.

Viewers will eventually be struck by the realization that Requiem for a Dream and Precious: Based on the Novel Push by Sapphire combined contained more belly laughs.

One can't help but be immensely disappointed.

It's pretty fantastic, is what I'm getting at.

MacGruber is easily the best movie based on a Saturday Night Live skit in 15 years. But, considering the quality of recent sketch-to-screen projects, that sentence doesn't quite do justice to how funny the movie is.

It's funny but forgettable.

[MacGruber is] a misguided MacGyver spoof, which relies on shock value and bad-TV nostalgia for what little fizz it has.

It's one joke, stretched over 90 minutes... I don't know that anyone expected this to be good, or really, what the purpose of writing a review about it would be. What you see is what you get: a series of decent gags, the occasional one hilarious, strung together lazily with something resembling a plot, in which MacGruber has to overcome his baggage and his incompetence in order to take down the villain, Dieter Cunth - great name - played by Val Kilmer, who is still alive, I guess... and to his credit, can still act decently. Kristen Wiig is always funny, and Ryan Phillippe is quite good as the straight man, too, but as most would anticipate, there's not much here. A forgettable indulgence.

I only own a film if I can watch it again and again and again and still enjoy it. Which I can do with this film. It's stupid and I think it's basicaly all the jokes Forte and Taccone couldn't get into SNL. But damnit it's funny. This was the first sign that Wiig was going to be the comdey Queen, even in movies.

Such a great transformation of MacGruber from SNL to the big screen. Highly recommended for fans of the MacGruber segments on SNL. Forte & Wiig together in this movie have natural chemistry and are a class act. Maya Rudolph's character, even though not in the movie a lot, is great & who could forget Ryan Phillippe's, Piper or Val Kilmer's, Dieter Von Cunth. Memorable characters and lines come together to make this movie the perfect movie for any season.