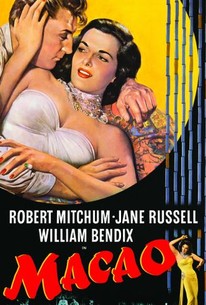 J. Von Sternberg directed this steamy film noir centered in the Oriental port. Nick Cochran (Robert Mitchum) is fleeing the law to escape punishment for the crime he didn't commit, while singer Julie Benson (Jane Russell) works in a smuggling kingpin's club. Cochran is offered amnesty in the U.S. if he can track down the crime boss, and Benson reluctantly agrees to help. A vehicle for the sex-bomb and the beefcake turns out melodramatic at best.

James B. Leong
as Knifer

Phil Harron
as Sikh
View All

Sternberg's personality survives; what's missing is the soul that might have turned the artifice and self-parody into poetry.

What is so enjoyable, apart from Harry Wild's shimmering camerawork, is the tongue-in-cheek tone of the script and performances, best evidenced in the sparkling banter and innuendo between Mitchum and Russell.

All the other ingredients, including Miss Russell's famed physique, are pretty much the same as have been tumbled into previous cheesecakes with Jane and Bob.

An exciting film noir entry, steaming up the screen with sultry, sexy Russell and a somnambulistic Mitchum who manage to clinch often, despite their sneering disregard for each other.

One of Robert Mitchum's weaker movies

If you are looking for an underrated film noir gem--that somehow got swept under the rug--this is it!

On the boat to Macao, Nick Cochran(Robert Mitchum) is just minding his business when he is hit in the head by a shoe, leading to his rescuing Julie Benson(Jane Russell) from a possible sexual assault. In return, she lifts his wallet and passport. But at least she does not have to pay for the nylons that traveling salesman Lawrence Trumble(William Bendix) gives her as a free sample. In any case, casino owner Vincent Halloran(Brad Dexter) fingers Cochran as a cop sent to replace the last New York City cop Halloran had killed. As fairly simple as it is, "Macao" does have one neat trick of misdirection to play which probably worked better when the movie was released. After that, all it can do is rely on a little suspense and its stars' chemistry which is a mixed bag to say the least. While Robert Mitchum is supremely relaxed, Jane Russell has much more sex appeal than actual talent.(Admittedly, she can carry a tune or two.) That leaves it to Gloria Grahame to steal the movie whenever she is kind enough to put in an appearance.

This ios Film Noir at its best. Its been a long time since movies were made like this, and I miss them, filtering throught the junk that is put on film screens in the united states is very dissapointing, and not getting better, I mean why do I have to watch a present day Disney / Pixstar movie with a cartoon animal busting his balls on a fence, or why does every movie always show a man pissing,are women turned on by this I don't Think So, Anyway here is my review, sorry I got up on my soapbox again. Nick Cochran, supposedly an American adventurer and petty criminal, arrives, short of cash and on the run from the United States where he is wanted, in Macao (at this period still a Portuguese colony). Arriving on the same boat is an attractive young woman named Julie Benson. Julie is hired by Vincent Halloran, the local gambling boss, as a singer in his casino-cum-nightclub. Halloran is also wanted in America (for offences far more serious than Cochran's), but cannot be extradited as long as he remains in Macao. Although this is a short film, there is still time enough for the plot to become very complex. A number of the characters are not what they seem. Is Cochran, for example, what he purports to be, or is he really a cop trying to lure Halloran beyond Macao's three mile limit into international waters where he can be arrested? Who is Lawrence Trumble, the mysterious salesman who also appears to have a sideline in stolen jewellery? This is the second film which Robert Mitchum and Jane Russell made together; the previous year they had starred in "His Kind of Woman". The two films have much in common beyond the two leading actors. Both have an exotic setting and both feature gambling and a ruthless gangster. The two leads play similar types in both films, Mitchum a seedy, down-on-his-luck character, likable despite his shady past and occasionally cynical exterior, and Russell a sultry glamour girl. There is, however, an important difference between the two films. "His Kind of Woman" can be seen as a comic send-up of the crime thriller genre, starting off in the dark, menacing film noir style and then metamorphosing into a comedy action-thriller. "Macao" is the genuine article rather than a parody, being for the most part played seriously rather than for laughs, although it the atmosphere is perhaps lighter than in some other films noirs. The difference lies less in the look of the film- "Macao" has some striking black-and-white photography- than in the moral atmosphere. Films such as the Humphrey Bogart classics "The Maltese Falcon" and "The Big Sleep" were notable not only for their dark, gloomy look but also for their tone of moral darkness. The private eye characters played by Bogart struggle to maintain their private integrity in a world of corruption and deceit. In "Macao" there is something closer to a traditional morality, with good triumphing over the evil of the ruthless villains. The result is perhaps something of a hybrid between authentic noir and a more traditional adventure thriller, still highly watchable even today. 5 Stars Should have gotten 10 its that good. 2-5-13

This movie is awesome. You get the amazing scenery of Macao, Jane Russell & Gloria Grahame and Robert Mitchum is also once again an amazing badass. The fantastic character actor William Bendix does solid work as well.