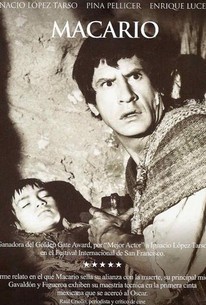 B. Traven, the reclusive author of Treasure of the Sierra Madre, used an old Mexican folk tale as the basis for his novel The Third Guest. The book was in turn adapted for film as Macario. Ignacio Tarso plays a poverty-stricken peasant who goes on a hunger strike, hoping that someone will take pity on him and give him a turkey dinner. Torres' wife Pina Pellecier steals a turkey, and just as Torres is about to wolf down his food, he is visited by Death (Enrique Lucerio). The grim reaper offers to bestow magical powers upon Torres in exchange for part of the meal. Torres is gifted with the ability to restore health to sick people, but he is permitted to utilize this gift only upon persons of Death's choosing. At first, Torres is lauded as a hero, but before long he is being shunned as an instrument of Satan. Torres' last-ditch effort to redeem himself causes him to renege on his bargain with Death--and you know what that means. ~ Hal Erickson, Rovi

José Gálvez
as The Devil

The legend has been transformed by two gifted Mexicans, Director Roberto Gavaldon and Cameraman Gabriel Figueroa, into a fragile but profound little picture that abounds and delights in the black-and-white magic of the magic lantern.

The charm of it is in the felicity with which it flows from a solemn, sad account of misery and futility into a bubbling comedy, spiced with morbid witticisms, and then into a drollish horror tale.

Gabriel Figueroa's cinematography is the best element of this Mexican folk tale, which was the country's first nominee for Foreign Language Oscar.

There are no featured audience reviews yet. Click the link below to see what others say about Macario!