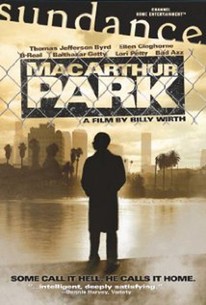 Playwright Tyrone Atkins lost a promising career in theater and film -- as well as his home, his belongings, and (for a time) his freedom -- when he became addicted to crack cocaine. After conquering his habit, Atkins used his experiences living on the streets as the basis for this story about a group of homeless addicts attempting to hold on to the last shreds of their dignity. Cody (Thomas Jefferson Byrd) was once a respected jazz musician, but after getting hooked on crack, Cody abandoned his wife and son and now lives in a makeshift hut in Los Angeles's MacArthur Park. Cody scrapes up enough money to feed his habit through petty crime and acting as a go-between for more privileged users willing to pay a premium to him rather than hunt down hard-nosed dealer Freddie (B-Real). Cody's friend Blackie (Miguel Nunez) gets along in much the same way, but he finds himself in hot water after he takes off with the money of downwardly mobile TV actor Steve (Balthazar Getty), who gave him a handful of cash to score drugs for him. Cody is forced to take a long look at his responsibilities when he's confronted by his son Terry (Brandon Adams), whom he hasn't seen in years; Cody also runs into Karen (Rachel Hunter), once a fellow addict, who wants him to know there is a way out of the cycle of addiction. MacArthur Park's supporting cast also includes Julie Delpy, Lori Petty, Ellen Cleghorne, David Faustino, Sticky Fingaz, and Sydney Tamia Poitier, while R&B star Macy Gray contributed to the soundtrack; the film was enthusiastically received in its screenings at the 2001 Sundance Film Festival.

Miguel A. Núñez Jr.
as Blackie

A film looking for its own identity that was made as a labor of love.

There are no featured audience reviews yet. Click the link below to see what others say about MacArthur Park!