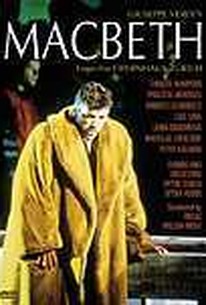 In the violent underbelly of a powerful city, one man's blows ring out from the street fights above everybody else's. Part of a noble gang, feared by the villainous, respected by the community, the vigilante Macbeth protects his friends and neighbors from the violent crime committed by malevolent street gangs. A meeting with three mystics foreseeing Macbeth's control of the gang, combined with the driving ambition of his loving wife, prompts Macbeth to grasp his destiny through violent means. Instability within the gang ensues, with Macbeth murdering anyone who poses a threat to his new-found power. Directed by visions and supernatural visitings, Macbeth now leads a brutal and immoral gang by example, as the bloodshed spirals out of control as fast as Macbeth and his wife plummet into madness.

There are no critic reviews yet for Macbeth. Keep checking Rotten Tomatoes for updates!

There are no featured reviews for Macbeth at this time.