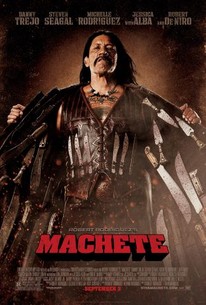 Critics Consensus: Machete is messy, violent, shallow, and tasteless -- and that's precisely the point of one of the summer's most cartoonishly enjoyable films.

Critics Consensus: Machete is messy, violent, shallow, and tasteless -- and that's precisely the point of one of the summer's most cartoonishly enjoyable films.

Critic Consensus: Machete is messy, violent, shallow, and tasteless -- and that's precisely the point of one of the summer's most cartoonishly enjoyable films.

A blade-wielding ex-federale hides out as a day laborer when he is double-crossed by a corrupt senator.

Robert De Niro
as The Senator

Tommy Nix
as Dishwasher #2
View All

The film has some outrageously enjoyable set-pieces, but overall, the convoluted plot and Rodriguez' agenda spoil the fun.

This gleefully excessive pastiche of an exploitation picture delivers everything promised by its own faux trailer.

Basically very silly and wastes the time of some talented celebrities (including Lindsay Lohan, as an addled nymphet). But it has its moments.

All set up and no punchline.

Although refreshingly blunt, you're just left wishing that Machete had been a bit sharper.

Despite the occasional funny moment, this grindhouse spin-off is a genuine grind to sit through.

There's still plenty of fun to be had with the hilarity-infused bloodshed, but the quality seems to be steadily replaced by quantity.

An almost Troma-like devotion to B-movie exploitation mixed in with genuine action.

Starts out at a dead run and doesn't bother to slow down. There is a lot of story for a movie that never goes more than a few minutes between moments of absurd and brutal violence.

Machete, the man, the myth, the movie. Balls out, no holds barred, kick ass fun.

Debbie Lynn Elias
Behind The Lens
View All Critic Reviews (195)

An empty and silly exercise in cheap exploitation with unfunny attempts at humor and a stupid plot that is preposterous even for a film that is not supposed to be taken seriously - which makes me think that sometimes a fake trailer should just remain that.

The film famously spawned from one of the fake parody trailers that was seen in the Tarantino and Rodriguez movie 'Grindhouse'. Personally I'm still up for the movie of 'Werewolf Women of the SS' which looked much better, you never know, they've done a movie for all the others I believe. As I'm sure you're all aware this film has been deliberately shot in that old grungy 70's B-movie exploitation style which continues from its trailer parody roots. The films visuals are purposely scratchy faded marked and at times slightly glitchy to match those of the heyday of grindhouse/exploitation crapola. Now myself I don't really like this era of film and the way it looked, the films beginning credits sequence being a brightly coloured badly composed montage of film stills accompanied by some seriously retro text font and cheesy action music. The whole thing reminded me of my childhood days and those hammy American cop shows like 'Chips' or 'Starsky and Hutch' (take your pick from many). Of course this film is much much more hokey than those shows and is influenced by films before my time but I still shudder at the thought of it, I do remember some darn hokey stuff I can tell you (1977 Spider-Man movie). So being a crummy sleazy grindhouse action flick you can guess the plot isn't gonna tax your brain. Well you would think that but its actually quite relatable to current affairs both in the UK, Europe and the US. I refer to the various immigration issues flying about these days which has grown stronger over the last few years, especially right now in the US where there are US citizens actively protesting in Texas against immigrants coming in from Central America. Obviously I'm not suggesting that any of the corruption, wall building and assassination attempts seen in the film are happening but the the films basic plot is eerily familiar. As for the film its exactly what you'd expect and more of what we saw in the parody trailer. Danny Trejo has a big machete and various guns, his mission is to get revenge on the corrupt suit that set him up on an assassination attempt against a corrupt Senator who is tough on immigration. The reason being they want it to look like an illegal Mexican tried to kill the Senator for his tough stance on immigration, thusly giving their cause a boost with the public and the excuse to build a big wall across the Texan border. Along the way Machete meets up with a few characters that help him. Cheech Marin is a Padre with a mean trigger finger, Michelle Rodriguez (who is cast in the same role every time) plays the tough Latino bitch who also has a mean trigger finger, Alba is a US Customs and Immigration officer with a mean trigger finger and Lindsay Lohan pops up too...with a mean trigger finger. On the baddie side is Savini as a hitman with a mean trigger finger, Don Johnson as a sadistic redneck vigilante border patrol leader and of course Seagal as the big boss who is a dab hand with a katana. Honesty the plot is highly convoluted (I've confused myself writing this!) and only serves to stuff as many big names in as possible, its like a Mexican/Latino Expendables. I can't really moan about that though as you know right from the outset the film is purposely ludicrous and outrageous. The same can obviously be said for all the action and violence, I found that it gets more absurd as the film gets towards the finale. At first it felt quite gritty and semi realistic to a degree, you know its a parody but you can run with it. But towards the end everything gets way out of hand with awful looking CGI action, explosions and blood everywhere, terrible death acting by the extras, crazy situations, Michelle Rodriguez getting shot in the eye and surviving and the hokiest death scene ever by Seagal. Honesty it actually looked like a something from a blooper reel! funny but..really? There are some clever moments of parody admittedly. I liked the baddie henchmen who discuss their jobs and what they think of their boss, the fact that one of them is starting to think that the boss is actually a bad guy and whether they are in the right line of work. Plus the fact they actually have injuries from the last fight they had with Machete, they chat about them, then in the end two of them quit before getting killed, finally realising its not worth it. Its very hard to review really as I know its all deliberate, its been made to look bad and cheesy, hokey acting and silly 'A-Team-esque' scenarios. On one hand I can kinda deal with that but on the other...its just shit! and it gets worse as the film progresses. Its a shame as the film is fun and more of an adult action flick for the most part with blood guts and tits on display. Unfortunately your suspension of disbelief is crushed towards the end, it goes beyond a mockery and morphs into a childish James Bond type of picture. I did quite like the final end credits and voice that announces Machete will return in 'Machete Kills' and 'Machete Kills Again'...nicely retro, nicely done.

All i have to say is. "Machete dont text" so so much fun