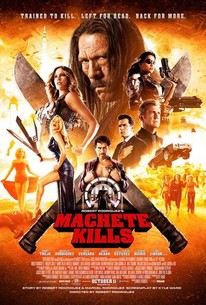 In MACHETE KILLS, Danny Trejo returns as ex-Federale agent MACHETE, who is recruited by the President of the United States for a mission which would be impossible for any mortal man - he must take down a madman revolutionary and an eccentric billionaire arms dealer who has hatched a plan to spread war and anarchy across the planet. (c) Open Road

Jimmy Gonzalez
as Man in Bondage

Alejandro Antonio
as Boss of Mendez

Crystal Martinez
as Wife of Mendez

Elon Musk
as Himself
View All

"Machete Kills" takes on the madman taking over the world sub genre favored by middle-era James Bond films, mixes that with an excess of "Star Wars" jokes, and concocts a bland caricature.

Machete Kills is a film in which style sardonically routs substance, a cloying gag built around the iconic quality of Trejo's matchlessly craggy face, which resembles a plate of sundried corned beef.

This ignores the first rule of proper B-movie exploitation cinema - that anything over 89 minutes is just excess baggage, of which Machete Kills has plenty. Still, at least it's authentic in one respect - the trailer is better than the film.

Machete Kills plays like a joke that's been told a few times too often.

A self-aware exploitation picture that winks as it picks your pocket.

When a celebrity chef like Rodriguez is just going through the motions, we can smell that the grindhouse fad is way past its expiration date. It's time to put a fork in it.

Even in its bloated state, it's still an entertaining grindhouse flick.

Trejo oozes grindhouse cool, but the movie itself commits an exploitation film sin - it's dull.

The dialogue fluctuates between self-reflective hilarity and just plain cringe-worthy.

A sequel to a film that was based upon a trailer.

I "get" grind-schlock. This isn't that, this is someone doing a bad impression of that.

The appeal of Rodriguez's '70s grindhouse influenced films like Machete Kills is bound to wear thin one day, but not today.

Exploitation films are good when they're over the top. The cheesier, the more outrageous, the sleazier the content, the better the exploitation film. If you're aware of the Robert Rodriguez brand of exploitation (a la "Grindhouse," "Machete," and "Death Proof") than this film will be right in your wheelhouse. This has got to be the biggest and grossest of his films, and has many elements that make a great action film. Every character is perfectly cast, including Amber Heard as a saucy beauty queen, Sofia Vergara as a murderous Madame, Mel Gibson as a maniacal villain, and Carlos Estevez as the bottomed out politician turned president. Everything about this film is strange and big, and silly, and I say that with positive enthusiasm. This is the perfect film if you want something huge and awesome, and unapologetic.

Hey I just realised something that I forgot to mention in the original movie review. You all remember Rodriguez's film 'Desperado' right. Well isn't the character of 'Machete' first seen played by Trejo in that film? the dude with all those small throwing knives strapped around his waist, its virtually the same character. Well once again this movie kicks off with those washed out, scratchy grungy 70's looking exploitation visuals. We actually get quite a neat little retro styled cinema introduction to yet another parody trailer for yet another Machete flick, this time in space. There is that same deep gravely voice narrating the trailer as the corny trademark infringing action explodes onto the screen accompanied by more cheesy action music and lots of hammy retrotastic onscreen text. Quite liked the little moment where 'Bleep' the robot played by Justin Bieber (not really) gets blasted to pieces. From here on though the decision has been made to continue the rest of the films visuals in regular glossy Hollywood fashion dropping the rough grungy B-movie look. I'm not really too sure why they would do that seeing as that visual appearance is the whole point of the franchise, that's its quirky raison d'etre, without it the movie just becomes another daft action flick...only this is just absurdly ridiculous bordering on spoof-like. Unfortunately this is exactly what happens, this movie is so slapdash and crazy that you simply can't really enjoy it. All rules of reality and beyond go completely out the window as Machete is 100% invincible and can literately do anything that is required. Jumping from a great height out of a helicopter into a speed boat and taking out the bad guys on board...no problem, just press the X button and the right shoulder button to perform this special move. Thing is you have the same issue when reviewing these type of flicks. I know its all been shot like this on purpose, I realise the extreme gory bullet ridden lunacy is part of the intentional charm, I realise the characters are larger than life and totally hokey and the whole movie is just a big insane comicbook of violence. I think we all know this, but at what point does it simply go too far and become shit? The plot really doesn't matter in this film (Machete vs Gibson and lots of various henchmen) as its entirely about the action set pieces, one after another, bigger and bigger, more and more over the top. Nothing matters in the film anymore because the protagonist is so God-like its all meaningless, its like playing a videogame with the infinite energy cheat on, fun at first but very boring after about ten minutes. There are only a few positives with this film, one being the unique mix of casting (kinda). The first movie had Seagal as the main boss, this time its Mel Gibson...and I can't deny he does save the day. Seeing Mel play the 'Bond-esque' villain is a real breath of fresh air and he clearly enjoys it. Lets not get carried away he doesn't really do much other than stand around and reel off cliched dialog but his presence is felt, he oozes a slick charm that just makes his villainy so watchable (despite it being highly childish nonsense). The moment he puts the silver mask on the film just sinks to yet another level of utter childish meaningless futile crapola...yet somehow its kinda cool. Why would his voice deepen with the mask on? why are his footsteps now like Robocop? why does he not treat his face before putting the mask on? and how does the mask not move around and feel really uncomfortable? Pointless questions I know but I gotta ask. The rest of the cast are mainly the same as before accept we have more outrageous cameos this time. Lady Gaga as a hitwoman with a talent for disguises (I think)...this led to various little pointless cameos. Savini is back but has changed sides, Rodriguez still plays the tough bitch and still looks like she needs a wash whilst Charlie Sheen goes by his birth name to play the US President. Probably the second best thing about this film after Gibson, Sheen basically plays 'Charlie Harper' as the US President...which basically means he's playing his usual womanising self. The best description for this film frankly is a violent adult version of Austin Powers mixed with James Bond. It sounds like a cheesy thing to say (or type even) but its true! you only have to see the last half of the film which is set in some kind of big weapons lab to realise what I mean. Hell...Gibson only needs a white cat under his arm and the transition would be complete. The only other thing I quite liked was the fact the ending is open and leads into the plot from the trailer you see at the start of the film. The down side of that is the worry they might actually make a third film called 'Machete Kills Again in Space'! This may as well be a comedy because it sure as hell would be a total spoof of damn near everything ever. Time to let this go I think Mr Rodriguez, you had your fun in the first film which was quite good, but this has now gone too far, its been milked and the moment has well and truly past.

stupid and overtly violent, loved it.

"Machete Kills" continues the trend of dumb grind house action that the first film was so good at, but this had got to be the biggest pile of shit I've seen in a while. Not much comedy, not much good action, and the dialogue was not even clever, it was just cynical. I do not have much to say about this film. When you have Lady Gaga act in your film, you must be getting pretty desperate, and it's not like Robert Rodriguez did many new things, because he always hires the same people. There is supposed to be a third film, and by the end of this movie, the sad thing is, I want to see it so badly. This is one of the worst films of 2013.