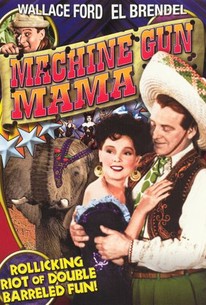 PRC's Machine Gun Mama is the sort of comedy that tries to get laughs by invoking the name of Brooklyn. Wallace Ford and El Brendel play a couple of American dimwits who find themselves travelling through Latin America with an elephant. Why an elephant? So Wally and El can sell the pachyderm to a broken-down carnival, thereby making the acquaintance of Armida, who is the prettier half of a trick-shooting act. What we have here is essentially a two-reel comedy, inflated to 61 minutes.

Ariel Heath
as The Blonde

Anthony Warde
as Carlos
View All

There are no critic reviews yet for Machine Gun Mama. Keep checking Rotten Tomatoes for updates!

There are no featured reviews for Machine Gun Mama at this time.