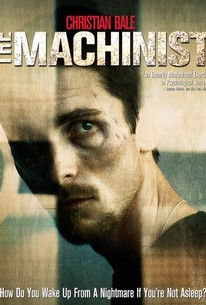 Brad Anderson directs the psychological thriller The Machinist, a production of Spain's Filmax company. Christian Bale plays Trevor Reznik, a factory lathe operator who has developed a serious case of insomnia. Lack of sleep has already started to wear down on his brain and his body. When he's involved in an accident at work, his co-workers turn against him. He starts to find strange notes in his apartment and see people that apparently aren't there. Jennifer Jason Leigh stars as call girl Stevie. The Machinist premiered at the Sundance Film Festival in 2004. ~ Andrea LeVasseur, Rovi

News & Interviews for The Machinist

View All The Machinist News

Critic Reviews for The Machinist

Until now Bale's screen persona has been defined by a graceful athleticism; here his physicality is repellent, yet he carries the occasionally creaky plot of Scott Kosar's unsettling screenplay to a resonant finish.

A few scenes into the gloom and you'll have a good idea what is generally up, if not the specifics, making the journey toward the eventual, inevitable twist fairly one-dimensional.

One can't deny the dubious appeal of the spectacle of the skin-and-bone Bale, quite possibly endangering his health for the sake of his art.

Some people will pick up the clues early in The Machinist and some won't. I got some, not all, but I remained unengaged throughout, largely because of the film's deliberateness, which feels like lack of passion.

A gimmick with no real payoff.

Bale's performance has the emotional weight to substantiate this body-art spectacle, ranging from prickly self-righteousness through panicked self-doubt to morbid self-pity...

If Nine Inch Nails, Swans and Ministry ever loomed large in the landscape of your imagination, Anderson's gloomy aesthetic may exert a sour but lingering pull.

A brilliant, harrowing performance by Bale.

It's not necessarily a fun or loveable picture, but it is interesting and entertaining.

With time as a buffer, it's now easier to see The Machinist for what it is: a labyrinthine leap down the rabbit hole into a nightmarish wonderland.

Here, shorn of every ounce of body fat, Bale is laid open like an autopsy specimen, and he easily gives his best performance.

Audience Reviews for The Machinist

Relying on a bluish palette of desaturated colors, Anderson creates a tense atmosphere of nightmare, but it is Christian Bale who deserves especial merit for his unbelievable dedication (mostly physical) in this intriguing thriller about the unbearable weight of guilt.

Shades of Alfred Hitchcock and Rod Serling permeate this excruciating trip through the realm of hallucinatory insomnia ... and one hell of a guilt trip. Spot-on performances and a blue noirish atmosphere complete this pretty good Los Angeles hair puller that was actually shot in Barcelona.

Bale is amazing, as always. But this is a strange film.

You are either going to love this film or hate this film, but I don't see why anyone wouldn't choose the latter. I fully believe this film to be a masterwork in every possible way. Christian Bale gives the performance of his career in my opinion, as Trevor Reznik, a man who has literally not slept in over a year, because his body is incapable of it. All that is left on him is skin and bones. Once tragic events begin to occur, he starts to vision a man, who really doesn't exist, who serves a purpose as to why these events are happening. The conclusion will absolutely blow your mind. The direction is very unique, the writing is perfect, and the story is impeccably visioned. "The Machinist" is a film that I shall not forget!