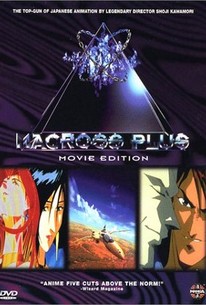 In the year 2040, on the distant planet Eden, former childhood friends Isamu Dyson and Guld Bowman find themselves pitted against each other as test pilots of rival teams in a competition to decide the next generation of variable mecha fighters. The two must also deal with their own unresolved history with mutual love interest, Myung Fang Lone, who has returned as the manager of Sharon Apple, the AI pop star (virturoid) and the galaxy's biggest singing sensation. When Sharon's advanced artificial intelligence gains consciousness, Isamu, Myung, and Guld must face their turbulent past and come together as Sharon Apple becomes self-aware and takes control of the Macross battlefortress itself!

There are no critic reviews yet for Macross Plus Movie Edition. Keep checking Rotten Tomatoes for updates!

A four episode OVA series that acts as the first official sequel in the Macross timeline ("Do You Remember Love?" was an abridged version of the series while "Macross II" was quickly retconned by series creator Shoji Kawamori) that boasts groundbreaking combination of traditional cel and computer-generated animation that still looks sublime even by todays standards. A much more small-scale and personal story, its starts out interesting enough with the deadly rivalry between two test pilots that used to be friends but are now bitter enemies (almost like a much more compelling version of "Top Gun"). Unfortunately, as the OVA goes along it starts focusing more on the test pilot's childhood friend Myung, leading to a rather uninteresting love-triangle that is not helped by the fact that Myung is such a joyless stick in the mud. After a surprisingly filler-ish third episode, the anime descends into a boring and trite rogue-AI plot containing a sloppy eleventh hour soap opera twist (creating a significant plot hole) and an ending that just cuts off anticlimactically. It's a shame because the OVA does a good job of getting into the mind-set of a test pilot, the action is cool, and it also boasts a decent supporting cast that end up being under-utilized. On a side note: Macross Plus was one of the earlier works of Shinichiro Watanabe (co-director) and Keiko Nobumoto (screenwriter). Both would collaborate again on the anime series "Samurai Champloo" and the legendary "Cowboy Bebop". Meanwhile, the International dub features the voice-work of pre-Malcolm in the Middle fame Bryan Cranston as the arrogant test pilot Dyson. That's right, the guy who would go on to win Emmy's for his portrayal of Walter White on "Breaking Bad" was dubbing animes as a part-time job in the early nineties. That's just awesome.

Not as powerful as 1982's Macross: Do You Remember Love (or DYRL), but still a fast, fun joyride that really gets into the mind of a fighter jet test pilot. A damn blast. Worthy of the Macross namesake.