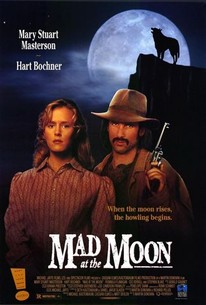 Mad at the Moon Photos

Director Martin Donovan (real name Carlos Enrique Varela y Peralta-Ramos) directed this beautifully photographed western/horror amalgam. The story takes places in the American West in 1892. Jenny Hill (Mary Stuart Masterson) longs for the love of the local rough-and-tumble outlaw James Miller (Stephen Blake), who is also in love with her. But Jenny's mother (Fionnula Flanagan) doesn't approve, and instead marries Jenny off to James's half-brother Miller Brown (Hart Bochner), a polite and inarticulate farmer. Miller is in love with Jenny, but she can't stand his touch. Jenny begins to lapse into boredom until the full moon rises and she discovers Miller is a werewolf who spends his nights growling and baying at the moon, while Jenny remains locked inside their cabin.

Critic Reviews for Mad at the Moon

There are no critic reviews yet for Mad at the Moon. Keep checking Rotten Tomatoes for updates!

There are no featured reviews for Mad at the Moon at this time.

Mad at the Moon Quotes