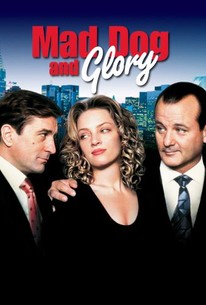 John McNaughton directed this Richard Price-scripted comedy about a cop who learns to love an unwanted gift from a gangster. Robert De Niro plays Wayne Dobie, a shy and reclusive Chicago cop who has never fired a gun. Dobie is an evidence technician who takes photographs at crime scenes, earning the moniker of "Mad Dog" for his diffident attitude. One day Dobie walks in on a convenience store holdup and saves the life of Chicago mob boss Frank Milo (Bill Murray). Frank is impressed by the way Dobie handled the holdup and wants to pay him back for saving his life. In thrall to Frank is Glory (Uma Thurman), who is working off her brother's gambling debts by living with the mobster. One day, Glory turns up at Dobie's house, explaining that Frank is giving her to him for one week as a gift. Initially Dobie wants nothing to do with Glory, but as the week goes on, he realizes he is becoming intensely attracted to her.

Evan Lionel
as Dealer in Car

Clem Caserta
as Guy at Table

William King
as Dealer in Park

Kevin Hurley
as Dealer in Park

Richard Price
as Detective in Restaurant

Eddie B. Smith
as Big John

These are all talented people, but on this project they seem oddly divided, within themselves as well as from each other.

De Niro seems committed to the part of the sensitive loner, while Murray all but succeeds in mixing smooth and sinister, heartfelt and hot-tempered.

An almost unconscionably enjoyable movie that plays like something conceived by a contemporary, furiously hip Damon Runyon.

It's the rapport between the two actors, De Niro and Murray, that saves Mad Dog and Glory from being something less than just another buddy movie.

Throw Robert De Niro, Uma Thurman and Bill Murray together in a Universal Pictures movie and what do you get? Something that starts off at a beautiful clip before back-pedaling like crazy into a risk-free happy ending.

The tone is uneven, with the dark moments lacking a tanglible sense of danger and the uplifting scenes missing a much-needed lightheartedness.

Tonally, it's not the film that got Scorsese's attention, Henry: Portrait of a Serial Killer, but set alongside any of McNaughton's pictures, [all] are formally of a piece: rhythmic, economical and quietly urgent.

The movie isn't exactly laugh-out-loud funny, but it does have a light spirit like a comedy would.

An edgy romantic drama that never quite jells, but has enough moments of humor and/or charm to make it worth seeing.

The film's main sin seems to be its indecision as to whether it is a black comedy, a satire, a thriller or a love story. It's none of the above. Just tedious.

A terrific little comedy, as well as a showcase for screenwriter Richard Price's incomparable ear for dialogue.

An original if incoherent fable about the intricate relationships between a cop, a girl, and a gangster whose tone shifts radically from scene to scene, unable to reconcile between the story's softer love elements and its harder urban edges.

DeNiro when he still had IT. Bill Murray as a manipulative, backstabbing, but very personable hood! And Uma Thurman as the woman between them. Thoroughly enjoyed this, this trip down memory lane, when movies were movies.

Milo: You love her? I own her!  "A cop who'd rather be an artist. A mobster who'd rather be a comic. And a woman who'd rather be anywhere but between them." A lot of great people were at work in Mad Dog and Glory. Robert De Niro, Bill Murray and Uma Thurman make up the all-star cast. John McNaughton, who directed Henry: Portrait of a Serial Killer directed it and Martin Scorsese produced it. With all that talent I expected a much more lively and much funnier film. What I got was an enormous disappointment. There wasn't much I liked about it. I was even taken aback by the performances from De Niro and Murray. They aren't bad, but they don't seem as good as we know they are. A cop saves a mobster's life in a holdup. In order to pay the cop back for saving his life, the mobster gives him a girl that he owns. The girl and the cop fall in love and now they have to decide how to stay together and not have Milo go crazy and kill one or both of them. That plot just isn't all that interesting to me and it is even less interesting on screen then it is on paper.  Mad Dog and Glory ended up being bland, and that is not something you expect when watching a Bill Murray or De Niro film. When I think about it McNaughton directed Henry... in sort of the same fashion. He made everything as dull as possible. In that movie it made sense though. This is supposed to be a comedy and should have been approached much differently. This pretty much shows why he faded away as a director and never really made anything as good or better than Henry.

People are never happy with where they are. You can always do more, even if you think you have what you want. It's never enough when you get there. For Wayne "Mad Dog" Dobie (Robert De Niro) the thought of a good retirement and health care as a police forensic photography, but he craves to be an artist. He craves to have a girl. He craves to be a tough man, the American ideal like John Wayne. One night he stops by a convenience store and in his own way saves Frank Milo (Bill Murray) from a robber. Frank wants to re-pay Mad Dog for saving him so he gives him a girl named Glory (Uma Thurman) for a week of... whatever. It's in that week that Mad Dog takes to first steps to be the person he wants to be, the problem is that when the weeks up Frank, who happens to be a mobster, wants Glory back to work off the rest of the tab she owes him. There's some weird casting in this. De Niro is the quiet, sky photographer while Bill Murray is the crime lord. It's different and it works. The pair play off each other in a way that is mesmerizing on screen. Bill Murray goes beyond his usual schtick and allows a peak at a dark demon that underlies his character who also spends time as a Mafia stand up comic. This film is one of Uma Thurman's greatest performances, balancing out a naive girl who has learned some street smarts since being under Franks thumb. Frank tells Mad Dog when they meet that he had the ability to fulfill his dreams and that's basically what the film shows in a warped sort of path. Mad Dog and Glory is a great movie with some classic performances that may have been forgotten over the years. It's a lost gem of the early 1990's.

Whatever happened to director John McNaughton? Not since "Wild Things" have I heard his name mentioned. Apparently he is still making stuff but seems to have fallen into T.V. obscurity despite showing some early potential. This, his follow up to the brutal and violent "Henry: Portrait of a serial killer" follows the story of shy and retiring police detective Wayne Dobie (Robert DeNiro), ironically nicknamed "Mad Dog" due to his gentle nature and lack of machismo. By chance one evening, during a liquor store hold-up, Wayne saves the life of Frank Milo (Bill Murray), who it later transpires is a local influential gangster. As a form of gratitude Milo sends a gift to Wayne in the shape of Glory (Uma Thurman) for Wayne to have "fun" with for a week. After reluctantly accepting, Wayne finds himself falling in love and determined to save Glory from the control and ownership of Milo. Director McNaughton begins this film with excellent use of black and white bursting into colour with the smoke of a crack-pipe during a drug deal. With this edgy beginning it looks like we will be treated to another gritty urban tale like his previous film. However, as the story progresses it falls into romantic comedy territory, which doesn't really gel with some genuinely dangerous situations and characters. The shift in tone doesn't really work and the film can't seem to decide what it wants to be. There's also an uncomfortable message running through it, of glorifying macho behaviour. DeNiro's character is never really accepted until he displays his macho potential and all the other male characters walk around with there chests puffed out and their fists clenched, leaving the females nothing more than cowering damsels in distress in need of saving. This is all a bit of a shame really, as the performances are excellent. DeNiro and Murray could easily have been cast in each others roles to good effect but by being cast against type it keeps them very interesting to watch. David Caruso is also brilliant, reprising his confident "NYPD Blue" type policeman. These fantastic performances are what make this film a standout and worthwhile. Its hard to be overly satisfied with its different tones and uneasy balance with humour and while not entirely successful, it is at least ambitious and does things differently.