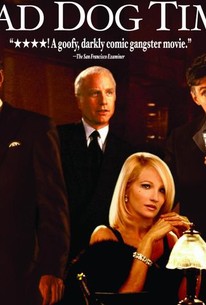 A group of mobsters fight for control in this satirical comedy-drama. Vic (Richard Dreyfuss) is a not-especially-stable crime boss who -- following a spell in a mental hospital after being diagnosed with schizophrenia -- is sent home and is ready to resume his place as supreme leader of the mob. Mickey Holliday (Jeff Goldblum), Vic's enforcer and right hand man, is trying to get everything squared away for Vic's return, which may complicate his personal life, since he's been having an affair with Vic's girlfriend Grace (Diane Lane), as well as her sister Rita (Ellen Barkin). While Vic has been away, a number of other gangsters have been squabbling over who will take control of his territories, including Jake Parker (Kyle MacLachlan), Jules Flamingo (Gregory Hines), and Jacky Johnson (Burt Reynolds). However, it's the seriously eccentric Ben London (Gabriel Byrne) who turns out to be Mickey's and Vic's most potent rival as the various gangsters shoot it out over who gets what piece of the pie. Inspired in part by the "Rat Pack" crime flicks of the 1960s -- such as Ocean's Eleven and Robin and the Seven Hoods -- Mad Dog Time (also released under the title Trigger Happy) was written and directed by former actor Larry Bishop, son of Rat Packer Joey Bishop, who pops up in a small role. Larry's co-star from Wild in the Streets, Christopher Jones, appears in a supporting role as a gunman; it was his first film appearance since Ryan's Daughter in 1970.

Rob Reiner
as Albert the Chauffeur

Richard Pryor
as Jimmy the Gravedigger

The first movie I have seen that does not improve on the sight of a blank screen viewed for the same length of time.

I really enjoyed this bit of satirical mayhem as a full on cast of stars, go ahead, count 'em, rip through undiscovered treasure of a gag on I'm-tougher-than-you mob films that I'd never even heard of before. Gabe Byrne particularly sparkles, given crazy dialogue, but then everyone's great. A very nice surprise.