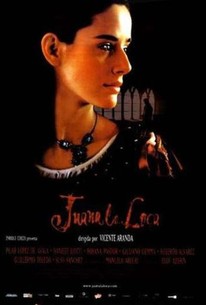 This lavish historical drama was inspired by the true story of Juana the Mad, who became Queen of Spain before her willfulness and jealousy robbed her of her power. During the late 15th century, Juana (Pilar Lopez de Ayala) was born to the Spanish royal family, and as a teenager her mother, Queen Isabella (Susy Sanchez), arranged for her to marry Archduke Philip (Daniele Liotti) of Brussels. The marriage is a matter of politics more than anything else, and Juana is upset that she must leave behind Alvaro de Estuniga (Eloy Azorin), the boy she loves, but from the first time she sees Felipe, she's passionately attracted to him, and he soon awakens her to the joys of lovemaking. While Juana is happy with her new husband, Philip soon reveals himself to be an incorrigible womanizer (and rapidly loses sexual interest in her), leading to much tension between Philip and Juana. To complicate matters further, her sexual appetite and desire to possess her husband only build, and soon, she is completely out of control on an emotional level - throwing tantrums in the rain, lapsing into arousal while she breast feeds and evincing a spectrum of equally questionable behavior that leads others (including Philip) to dub her "Juana the Mad."In time, Juana becomes the Queen of Spain, but her rise to power is tempered by Felipe' s behind-the-scenes machinations to have her dethroned once and for all. Lo and behold, she falls into the trap of missing this - as she's too distracted by Philip's continued infidelity. ~ Mark Deming, Rovi

Andrés Lima
as Marquis of Villena

Ricardo Garcia Robledo
as Juan as a Child

Jennifer Diaz
as Maria as a Child

Nerea Garcia
as Catalina as a Child

Virginia Olmas
as Isabel as a Child

Diana Costa
as Lady
View All

Every historical film, it seems, has certain requirements: galloping horses, characters swathed in yards of tapestry fabric, demure yet treacherous ladies-in-waiting. Mad Love has all that and more.

A sumptuously-appointed account of the life of the 16th-century Spanish royal Joan of Castile.

Nothing more or less than an outright bodice-ripper -- it should have ditched the artsy pretensions and revelled in the entertaining shallows.

There's a little violence and lots of sex in a bid to hold our attention, but it grows monotonous after a while, as do Joan and Philip's repetitive arguments, schemes and treachery.

Forget the Psychology 101 study of romantic obsession and just watch the procession of costumes in castles and this won't seem like such a bore.

It's López de Ayala's show, and she's relentless in her energy and passion.

dwells on questions of Joan's madness to the point of exhaustion

A chick flick of the first order, disguised by just enough historical detail to elevate the proceedings somewhat.

Aranda's screenplay and direction are rather shallow, so that this bodice-ripper feels more like a Lifetime made-for-cable movie than an epic, tragic romance.

Accuracy and realism are terrific, but if your film becomes boring, and your dialogue isn't smart, then you need to use more poetic license.

So vivid a portrait of a woman consumed by lust and love and crushed by betrayal that it conjures up the intoxicating fumes and emotional ghosts of a freshly painted Rembrandt.

Lush and beautifully photographed (somebody suggested the stills might make a nice coffee table book), but ultimately you'll leave the theater wondering why these people mattered.

It's from spain, so of course it has lots of tits. Can't remember much else.

Though not much interested in the Spanish history, I really loved the amazing sets and the very beautiful actress who portrayed the allegedly crazy queen. The way her obsession with her not so trustworthy husband drives her to the point of madness is really captured well.

I enjoyed it, as much as you can enjoy a really depressing movie. This is the second Spanish movie that i've watched that's dealt with men abusing their power. They said that Joan was mad but she wasn't mad in the sense of craziness, she was furious. Her husband was cheating on her with multiple other women...of course she's going to be pissed off and act eractic. People knew that the Archduke was unfaithful but they chose to ignore it. The men who knew fell into two camps, either they were helping to cover it up or they were too afraid to act against him. And the women who knew couldnt do a damn thing about it, because well, they were women. I mean I'm sure that it's true to the time period but it really pisses me off. But it was really well done.