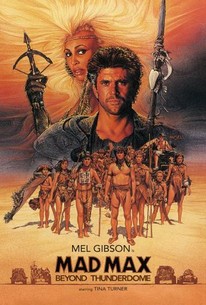 Critics Consensus: Beyond Thunderdome deepens the Mad Max character without sacrificing the amazing vehicle choreography and stunts that made the originals memorable.

Critics Consensus: Beyond Thunderdome deepens the Mad Max character without sacrificing the amazing vehicle choreography and stunts that made the originals memorable.

Critic Consensus: Beyond Thunderdome deepens the Mad Max character without sacrificing the amazing vehicle choreography and stunts that made the originals memorable.

About 15 years after the events of Mad Max 2, nuclear war has finally destroyed what little was left of civilization. Grizzled and older, former cop Max (Mel Gibson) roams the Australian desert in a camel-drawn vehicle -- until father-and-son thieves Jebediah Sr. (Bruce Spence) and Jr. (Adam Cockburn) use their jury-rigged airplane to steal his possessions and means of transportation. Max soon winds up in Bartertown, a cesspool of post-apocalyptic capitalism powered by methane-rich pig manure and overseen by two competing overlords, Aunty Entity (Tina Turner) and Master (Angelo Rossitto), a crafty midget who rides around on the back of his hulking underling, Blaster (Paul Larsson). Seeking to re-equip himself, Max strikes a deal with the haughty Aunty to kill Blaster in ritualized combat inside Thunderdome, a giant jungle gym where Bartertown's conflicts are played out in a postmodern update of blood and circuses. Although Max manages to fell the mighty Blaster, he refuses to kill him after realizing the brute is actually a retarded boy. Aunty's henchmen murder Blaster nonetheless, then punish Max for violating the law that "Two men enter, one man leaves." Lashed to the back of a hapless pack animal and sent out into a sandstorm, a near-death Max is rescued by a band of tribal children and teens. The descendants of the victims of an airplane crash, the kids inhabit a lush valley and wait for the day when Captain Walker, the plane's pilot, will return to lead them back to civilization. Some of the children, refusing to believe that Max isn't Walker and that the glorious cities of their mythology no longer exist, set off in search of civilization on their own. Max and three tribe members must then rescue their friends from Bordertown and the clutches of Aunty Entity -- a quest that ends in a lengthy desert chase sequence that echoes the first two Mad Max films. Spence also appeared in Mad Max 2 in a different role, that of the Gyro Captain. ~ Brian J. Dillard, Rovi

Angelo Rossitto
as The Master

Frank Thring
as The Collector

Paul Larsson
as The Blaster

James Robertson
as Little One

Gerry D'Angelo
as The Hunter

Travis Latter
as The Hunter

Miguel López
as The Hunter

Paul Daniel
as The Hunter

Tushka Bergen
as The Guardian

Emily Stocker
as The Guardian

Sandie Lillingston
as The Guardian

Ben Chesterman
as The Gatherer

Liam Nikkinen
as The Gatherer

Dan Chesterman
as The Gatherer

Christopher Norton
as The Gatherer

Katharine Cullen
as The Gatherer

Heilan Robertson
as The Gatherer

Gabriel Dilworth
as The Gatherer

Hugh Sands
as The Gatherer

Rebekah Elmaloglou
as The Gatherer

Marion Sands
as The Gatherer

Shari Flood
as The Gatherer

Kate Tartar
as The Gatherer

Rachael Graham
as The Gatherer

Pega Williams
as The Gatherer

Emma Howard
as The Gatherer

Tarah Williams
as The Gatherer

Joanna McCarroll
as The Gatherer

Daniel Willits
as The Gatherer

Toby Messiter
as The Gatherer

Tonya Wright
as The Gatherer

Amanda Nikkinen
as Little One

Flynn Kenney
as Little One

Luke Panic
as Little One

William Manning
as Little One

Adam McCreadie
as Little One

Sally Morton
as Little One

It's comic books in a Cuisinart, all costumes and cute monikers and no story, a sort of case history of just what's wrong with sequelitis.

This middle portion of the picture becomes dangerously preachy, but just before we and Max are bored, director Miller returns Max to his roots, a screaming chase sequence through a desertlike Australian landscape.

Beyond Thunderdome is the third in George Miller's Mad Max series, and it closes the trilogy like a lightning blast followed by the ominous, resonant drone of thunder.

There is something to get excited about in this third chapter of the Mad Max series: the powerhouse presence of Tina Turner.

Mad Max Beyond Thunderdome isn't a bad movie. It has entertaining sections, decent performances and more than a few provocative images. But it also has a major shortcoming: It's too darned sane.

An astonishing display of virtuoso cinema that is destined to take its place among the most vivid and freshly imagined fist-to-groin contests in the medium's history.

The suspense is still effective and the climactic railroad chase at the conclusion handsomely echoes the other outrageous stunts of the trilogy.

This is a wild, imaginative action film that truly shows what the power of cinema can accomplish in even the direst of situations.

In a sense, it's sort of the Return of the Jedi of the Mad Max series: It's solid, it's engaging, but yeah, it's also a kind of a step down from the previous two

It's hard not to wonder why Beyond Thunderdome isn't better.

Outrageously sinister, unblinkingly violent, Mad Max Beyond Thunderdome is everything that fans of the futurist road warrior could hope for and more.

The directors, George Miller and George Ogilvie, borrow from every source they can find; movie buffs can pass the time spotting the Lynch shot, the Leone shot, the Jodorowski shot, and all kinds of others.

It fully embraces the extravagant "pox-ecliptic" over-the-topness that had already been injected into Mad Max 2 and made that film so visually unique, thus being more entertaining than the previous movies even if more cerebral and less action-oriented (or perhaps because of that).

Often unfairly seen as the weakest of the series, it is actually the most fun. Sure, the action doesn't start until very late (but really delivers then), but the quirky ideas, outrageous production design and world building make this a highlight of the series. It also helps that two great Tina Turner songs frame the film, making it an 80s lovechild in post-apocalyptic clothes.

Not sure what happened here, but this is not the Mad Max I remember from the first two films. It makes sense though because after doing some research this wasn't originally a Mad Max film, but rather a Lord of Flies film. They changed their mind and had George Miller direct the stunts (which there's barely any compared to the first two films) and had George Ogilvie direct the actors. The first half of the film was fine, but the second half is boring, uneventful, and messy. You can tell there's two different ideas clashing because none of the second half of the film matches anything else in the franchise. I've seen people call this Mad Max for children and that is rather accurate. This just doesn't feel like it belongs with the first two at all. A sad way to end the original Mad Max series before it got rebooted.

Mad Max Beyond Thunderdome trades away its menacing thrills and violence for a much more toned-down, funkier and adventurous take. The film still has its captivating action sequences (especially the Thunderdome concept) to hold it up, but the intensity lessens in comparison to the other films in the franchise. 3.5/5