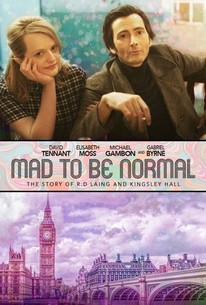 Mad to Be Normal Videos

Mad to Be Normal Photos

Mad To Be Normal reveals the story of R.D. Laing, the famous psychiatrist and one of Scotland's greatest ever minds. Working out of Kingsley Hall in East London throughout the 1960s and 1970s, Laing performed various daring experiments on people who were diagnosed as mentally disturbed. His revolutionary methods involved experimenting with LSD on his patients and practicing a form of self-healing known as metanoia, causing outrage and controversy in the medical profession and radically changing attitudes and perceptions of mental health around the world.

Critic Reviews for Mad to Be Normal

There's plenty of jazzy paisley shirts, flamboyant velvet suits and on-the-nose music cues to denote its psychedelic 1960s setting, but these elements do little to soften Laing's eye-raisingly invasive and possibly inappropriate approach to his patients.

It's elevated above bog-standard biopic fare by the performances.

David Tennant is on pugnacious, mercurial and beady-eyed form in this very interesting and absorbing film.

Mad to Be Normal boils a fascinating subject down into a slightly clunky, simplistic bio-drama.

Tennant's performance is strong, and he gives energy to a script that jolts in different directions looking for focus.

There's an almost complete absence of narrative progression, or anything that helps you to understand why this needed to be a feature film and not, say, a radio play or a magazine longread.

Like Laing's ideas and experiments, "Mad to be Normal" turns out to be much the mixed bag, with just as much worth tossing out as there is to celebrate.

David Tennant's masterful portrayal of a man driven to do good, but with astonishingly little self-awareness of the chaos he leaves in his wake, is a delight to watch -- though we don't get enough context.

Mad to Be Normal is an enthralling drama about a man who was both misunderstood and misguided.

More illuminating as a character study, with the ever-charismatic Tennant showing how Laing was able to dominate those around him so easily.

Mad to Be Normal takes the life story of someone who defied norms in every aspect of his life and then squeezes said story into a traditional biopic. What should have been a film vibrating with Laing's unique energy ends up being unengaging.

Mad To Be Normal lingers well after the credits have finished rolling.

Audience Reviews for Mad to Be Normal

There are no featured audience reviews yet. Click the link below to see what others say about Mad to Be Normal!

Mad to Be Normal Quotes