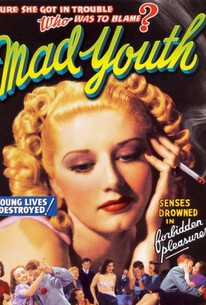 "Exploitation" king Willis Kent was both producer and director of the deathless cautionary fable Mad Youth. Because she doesn't have proper parental supervision, heroine Mary Ainslee falls in with an unsavory crowd and ends up working in a clip joint.Things come to a sorry pass when both Ainslee and her "playgirl" mother Betty Compson find themselves both in love with the same oily gigolo (Willy Castello). As often happened in films of this nature, all action stops dead in its tracks half-way through the proceedings for a series of risible production numbers, staged in this instance at the La Golondrina Café in Los Angeles. The most talented of the bunch is tap-dancer Betty Atkinson, who also figures peripherally in the plot.

There are no critic reviews yet for Mad Youth. Keep checking Rotten Tomatoes for updates!

This is a good movie, it's exciting, dramatic, and edgy for it's time. I enjoyed it.