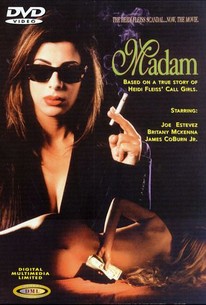 An intelligent, talented woman falls into the dangerous world of prostitution in this drama. Danielle (Brittany McKrenna) is a television journalist who is disappointed with a feature her station has run on Hollywood call girls, as she is convinced it hardly scratched the surface of the story. Danielle decides to investigate the matter herself, and in order to get the inside scoop, she takes a job at a supposedly "legitimate" escort service. Regardless of the establishment's public profile, Danielle discovers that what her customers want and demand is sex, and she is ushered into a strange new world of erotic deviance as she secretly tapes her sessions with her many new customers. What begins as a journalist's investigation turns into an obsession for Danielle, who is drawn deeper and deeper into the netherworld of sex for hire. Madam also stars Alisa Christensen, Joe Estevez, Sonny Landhan, Dena Ridgely, and James Coburn Jr..

There are no critic reviews yet for Madam. Keep checking Rotten Tomatoes for updates!

There are no featured reviews for Madam at this time.