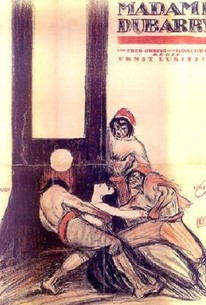 Before he became world-famous for his sophisticated sex farces, Ernst Lubitsch was primarily a director of outsized German "spectaculars." One such was Madame Du Barry, an operatic version of the life, loves and death of the legendary 18th-century French courtesan. Pola Negri plays DuBarry, who sleeps her way to the court of King Louis XV (Emil Jannings), ultimately becoming his mistress. Comes the revolution, and the rabble demands DuBarry's head. This gives Negri plenty of opportunity for strenuous histrionics as she's led to the guillotine. Small wonder that this film was retitled Passion for its American release. ~ Hal Erickson, Rovi

[Pola Negri] easily surpasses most of our home talent in the gentle art of vamping. The other players, in spite of their enforced anonymity, are uniformly excellent.

Lubitsch's film has the glamour and sweep of a historical drama as well as the intimacy of a romcom. The sets and costumes are gorgeous, the very best that Ufa's ample resources could provide.

There are no featured reviews for Madame Du Barry (Passion) at this time.