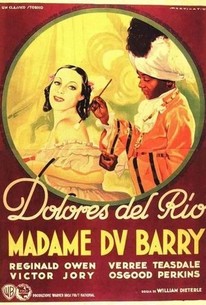 No boring historical pageant this, Warner Bros.' Madame DuBarry is a fast-paced, often hilarious romantic romp. Her Mexican accent held in check, the ravishingly beautiful Dolores Del Rio plays 18th-century French courtesan DuBarry like a 20th-century golddigger on the make. Brought to Versailles as the companion of courtier D'Aigullon (Victor Jory), former street waif DuBarry charms her way into the heart -- and boudoir -- of gouty King Louis XV (Reginald Owen). Many of the famous incidents in her character's life are given showcase treatment: When DuBarry's enemies steal her gown, she appears at her presentation at Versailles in a flimsy nightgown; and when she wants to take a sleighride in the middle of summer, King Louis "nationalizes" all the sugar in Paris as a substitute for snow. Upon Louis' death, the petulant new Queen Marie Antoinette (Anita Louise) banishes DuBarry from court, which our heroine takes in her usual stride, insouciantly chanting the roundelay "The King of France" as she walks out of the palace, with her head held high (and still -- at this point anyway -- firmly planted on her shoulders). ~ Hal Erickson, Rovi

Arthur Treacher
as Master of the Bedroom

As Du Barry, Dolores del Rio was a little disappointing.

"Who?" "Something extraordinary, my sire, and I've invited her to supper at the palace; a little party with the Polish nobleman." "Something extraordinary, eh?" "To see her sire, is to appreciate what I sacrifice for my king." "I suppose so. Pretty?" "Divinely so." "Witty?" "Just enough." "Her figure?" "Just right." "Her age?" "Just perfect." "18 or 30?" "Both, your majesty. She can look either." "A lady?" "As you prefer, sire." "And this is all one woman?" "And all woman, on the word of a Richelieu." And so the Duc de Richelieu (Osgood Perkins) provides King Louis XV (Reginald Owen) with the last mistress of his life, Madame du Barry (Dolores del Río). You see, the King has grown tired of going to his "Deer Park", which has a bevy of young women all thronging to get, uh, further acquainted with him, but also have ulterior motives. Madame du Barry quickly wins his heart, but with her extravagant ways, also engenders the ire and envy of various members of the royal circle. She maintains her position, but is eventually challenged by Marie Antoinette (Anita Louise), brought from Austria to wed the Dauphin (Maynard Holmes), who will eventually become Louis XVI. The film is based on historical characters, but its tone is to play up the comedic and naughty bits, and not necessarily to maintain its accuracy. It starts strong and it gets the opulence of the period right, and I have to say, del Río alone makes the film interesting to me. She does reasonably well, doling out lines like this double-entendre to the question about her outrageous demands. "Madame, what are you trying to do to France?" "Just what it's doing to me." One of her demands is to have sleigh ride in the summertime, which is then artificially created by the King's men with "all the sugar in Paris", of course while the poor suffer. There are aspects of the film that seem silly, and both Louis XV and Louis XVI appear far too clownish, but maybe there is a grain of truth in this about the 18th century royalty, and what would help usher in the age of revolution. It's made clear that the King's infatuation is based on Madame du Barry's sexual charm, and how she beguiles him through variety. As one character puts it: "She's something new every day. With the wisdom of the gutter, she's a thousand women. ... Can't you see how she changes every day? Her dress, her manners, her talk, her face, from hour to hour - now an innocent child, now siren, now saint... laughing, storming, petting, teasing ... a duchess in the morning, a milkmaid at noon, and a strumpet at night." I don't think we really see this variety in del Río's performance, however, or seduction which feels real. We do see her wearing a nightgown when presented to the court, as her way of standing up for herself when someone has her wig and gown stolen, but unfortunately, as the film plays out, it begins to lose some of its sizzle and steam. I read later that the film was originally intended to be more bawdy, but it became the target of those enforcing the nascent production code, and quite a bit of its content was censored. A scene with the young maidens dancing in diaphanous dresses in front of the King and his son survived, but it's all pretty tame. That's a shame, but it's still worth watching for del Río.