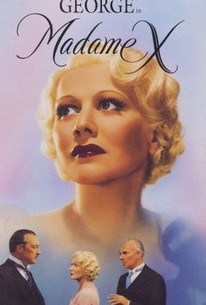 Sam Wood directed this fourth version of the Alexandre Bisson weeper, buffed to a high gloss by shimmering M.G.M. production values. Gladys George plays Jacqueline Fleuriot this time around, the wife of a diplomat who has an affair and is compelled to leave her husband and son. After abandoning her family, she sinks into a sea of debauchery, becoming involved in prostitution, blackmail, and eventually murder. After the murder, her son Raymond (John Beal), now a grown man and a famous lawyer, is called upon to defend her. Unaware that the woman he is defending is his long lost mother, Jacqueline tries to hide her past from her successful son.

George's performance is effective, and her characterization of the tipsy, defeated and maudlin old woman is faithful and moving.

The current Madame X is not the great picture its predecessor was. This is possibly because it is a tragedy in the grand old style, and the general palate for tragedy has considerably shifted in recent years.

Gladys George's sturdy performance saves the film to a certain extent, and young John Beal is fiery and eloquent in the famous courtroom scene.

Wood's direction of this trite material is standard but lends some credibility to the fairly ludicrous happenings.

Gladys George is excellent as was customary of her but this version of the old weepie creaks. See it for her but be prepared for some heavy handed acting from the rest of the cast and a stolid pace set by the director.