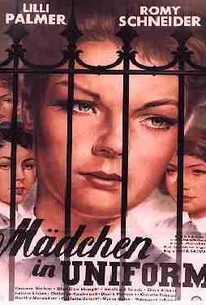 Christa Winsloe's novel Maedchen in Uniform was first filmed in Germany in 1933. The story, about a sensitive schoolgirl's lesbian attachment to her headmistress, was handled tastefully, albeit with remarkable frankness for its period. The 1958 remake is somewhat toned down and the material directed in a routine fashion, though technically the production has fewer frayed edges than the 1933 version. Romy Schneider stars in the old Hertha Thiele role as the student, while Lili Palmer takes over from Dorothea Wieck as the older woman. Made in 1958, the remake of Maedchen in Uniform was not released in the U.S. until 1965, possibly because it went against the production code edict concerning "suicide as a plot solution." ~ Hal Erickson, Rovi

Critic Reviews for Mädchen in Uniform (Girls in Uniform)

The acting doesn't go beyond the worst theatrical style, which tends to dehumanize the characters even more. [Full Review in Spanish]

Audience Reviews for Mädchen in Uniform (Girls in Uniform)

Slightly cheesy and dramatic, but it has a good storyline plus interactions of the characters. Set in an all girl boarding school before the second world war, one of the pupil Manuela fell for her teacher (Misunderstood her maternal love for the student for romantic love) The story itself is very ironic, with a lot of the masculinity and femininity counteracting each other. The film explored the possibility of having authority but still providing compassion at the same time.