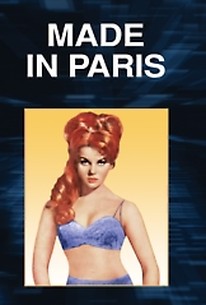 An American girl finds love and laughter in the City of Lights in this romantic comedy. Maggie Scott (Ann-Margret) works as an assistant to Irene Chase (Edie Adams), a fashion purchaser for a large clothing store. Irene sends Maggie to Paris as her representative for the annual fashion shows of the major European designers; Irene has an ulterior motive, as her son Ted Barclay (Chad Everett) is infatuated with Maggie and she wants to keep him away from her. While in Paris, Maggie strikes up a romance with Marc Fontaine (Louis Jourdan), a handsome Frenchman who was once Irene's boyfriend. However, Maggie is also being pursued by American reporter Herb Stone (Richard Crenna). To add to the confusion, Ted decides to fly to Paris in an effort to win Maggie's heart once and for all. Jazz fans will want to keep an ear open for performances by Count Basie and Mongo Santamaria. ~ Mark Deming, Rovi

Critic Reviews for Made in Paris

There are no critic reviews yet for Made in Paris. Keep checking Rotten Tomatoes for updates!

Audience Reviews for Made in Paris

Looked from a modern perspective this film is horrendously sexist and there is cause for about a half dozen sexual harassment suits within the first fifteen minutes of the film. But if looked at as a product of its time it's a bright fluffy colorful comedy with a stunning Ann-Margret and for anyone who is a fan of fashion a real eye candy treat. The film is load with high fashion sixties designs and has a fashion show smack dab in the middle. The is also a very fun number of You've Got To See Mama Ev'ry Night (Or You Can't See Mama At All) performed by A-M and a dolled up Reta Shaw. A nice surprise for Miss Shaw's fans since she usually was cast as maids and crotchety spinster ladies, it's great to see her frisky and animated singing a spirited version of the tune.

Made in Paris Quotes