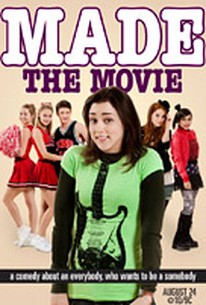 MTV's Emmy Award-winning series makes the leap to the big screen with this feature following unpopular band geek Tuba on her quest to earn a coveted spot on the high school cheerleading team. Concerned that his socially awkward sister is about to become the laughing stock of the entire school, Tuba's football-playing brother recruits his popular girlfriend Andi - a star cheerleader - to teach his sister the secret of whipping up school spirit. Somewhere along the way, the ambitious misfit and her popular mentor start seeing eye to eye, and realize that they have much more in common than they ever could have imagined. ~ Jason Buchanan, Rovi

Critic Reviews for Made... The Movie

There are no critic reviews yet for Made... The Movie. Keep checking Rotten Tomatoes for updates!

There are no featured reviews for Made... The Movie at this time.

Made... The Movie Quotes