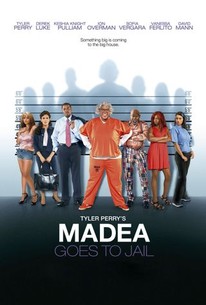 Tyler Perry transitions another one of his hit plays to the big screen with this adaptation of Madea Goes to Jail. The successful filmmaker stars once again as the mischief-prone older woman whose exploits this time lead her to jail, where she befriends and reforms a prostitute named Candy (The Cosby Show's Keshia Knight Pulliam). ~ Jeremy Wheeler, Rovi

Judge Greg Mathis
as Himself

Judge Mablean Ephriam
as Herself

Tom Joyner
as Himself

Al Sharpton
as Himself

Michael Baisden
as Himself

Steve Harvey
as Himself

Wanda Smith
as Herself

Sybil Wilkes
as Herself

Shirley Strawberry
as Herself

J. Anthony Brown
as Himself

Joy Behar
as Herself

Sherri Shepherd
as Herself

Elisabeth Hasselbeck
as Herself

Phil McGraw
as Himself
View All

Unfortunately the movie isn't about Madea going to jail at all. That would have been a funny movie.

As ridiculous as his films frequently are, Perry, a shrewd yet benevolent showman, knows and loves his audience.

Perry's playing-to-the-cheap-seats drag shenanigans hijack a morose street melodrama every 15 minutes and haul it into places even Flavor Flav fears to tread.

Adapting his own play, Perry has pared the plot way back while giving his law-breaking matriarch more room to run free.

Perry brings his own sensibility to every movie he makes and has enjoyed great success by following his own path. But he leaves you wanting more.

Continues Perry's improvement as a filmmaker and will undoubtedly please his growing legion of fans.

Until Perry decides one way or another what tone he is going to approach with his projects, the results will continue to be frustrating.

A half-silly/half-moralistic story about how it is never too late to turn things around, "Madea Goes to Jail" is as wispy as whipped cream, but also as easy to consume.

A tedious melodrama stuck on top of shrill comedy, and the two parts are both the worse off for the combination.

Perry clearly knows what his fans like, and he gives it to them -- by the shovelful. But for those not so tuned to his talents, Madea Goes to Jail is two excruciating hours of hard time.

Madea Goes To Jail is a fun movie for its comedy side, but the dramatic side is as stupid as any Tyler Perry film.

This movie is two different movies haphazardly smashed together. The two stories may have worked better separately, but together they suffer from jarring shifts in tone and a feeling of disconnection.

This does have serious matters in it. I only enjoyed Tyler Perry's part as Madea. Other scenes were okay. Too much seriousness seems always boring to me (doesn't mean I don't take things seriously, just happens during the movie that's it).