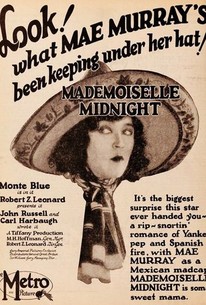 Mae Murray stars as the Mexican daughter of a French woman caught up in the political turmoil of a Mexican revolt. Monte Blue plays the American hero who tries to stop the revolutionaries. This routine film is highlighted by excellent production in filming, editing, close-ups and lighting. Robert McKim, Robert Edeson, and Nellie Coment co-star with Nigel de Brulier, Otis Harlan, Evelyn Selbie, Earl Schenck, Paul Wiegal and Clarissa Selwynne. The all-star cast and superior production of the feature help move along a thin plot with undeveloped romantic interest.

Robert McKim
as João
View All

There are no critic reviews yet for Mademoiselle Midnight. Keep checking Rotten Tomatoes for updates!

There are no featured reviews for Mademoiselle Midnight at this time.