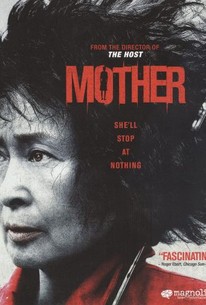 Critics Consensus: As fleshy as it is funny, Bong Joon-Ho's Mother straddles family drama, horror and comedy with a deft grasp of tone and plenty of eerie visuals.

Critics Consensus: As fleshy as it is funny, Bong Joon-Ho's Mother straddles family drama, horror and comedy with a deft grasp of tone and plenty of eerie visuals.

Critic Consensus: As fleshy as it is funny, Bong Joon-Ho's Mother straddles family drama, horror and comedy with a deft grasp of tone and plenty of eerie visuals.

Hye-ja is a single mom to 27-year-old Do-joon. Her son is her raison d'être. Though an adult in years, Do-joon is naïve and dependent on his mother and a constant source of anxiety, often behaving in ways that are foolish or simply dangerous. Walking home alone one night down a nearly empty city street, he encounters a young girl who he follows for a while before she disappears into a dark alley. The next morning, she is found dead in an abandoned building and Do-joon is accused of her murder. Thanks to an inefficient lawyer and an apathetic police force, Do-joon's case is quickly closed, but his mother refuses to let this be the end of the story.

Lee Mi-do
as Girl with scar

Nam Sung-ho
as Waiter at Manhattan

Lee Ok-joo
as Employee at a Supermarket

Oh Won-sik
as Waiter at a Karaoke

Yoon Hye-jin
as Young Woman at a Coach Station

The film wears its aesthetic sophistication lightly ( ... ) Bong takes the idea of the primacy of perception over reality to its ultimate extreme.

Bong's opening and climactic scenes, in which the old woman bops around to a dance tune amid a vast field of yellow grass, are typical of the movie's cockeyed poetry.

Mother is always a little larger than life -- a little richer and more strongly defined -- while never making life, real life, seem less than the full and focused object of its gaze.

If you're a fan of foreign cinema, keen to catch one of this year's best imports...Mum's the word.

There's little doubt that Mother improves considerably as it progresses...

A dark and engrossing gem.

Bong's clever screenplay and its heroic lead performance elevate a well-worn premise into a mesmerizing film.

Kim Hye-ja gives a compelling performance as the unnamed protagonist.

Buoyed by Kim's powerful performance, Bong crafts a unique story of motherly love and devotion, and turns it into one fantastic thriller.

Bong combines intense tragedy and dry humor to create a witty, unexpected sense of bizarreness in this ironic narrative that surprises us with its clever plot twists, elegant cinematography and an absolutely magnificent performance by Kim Hye-ja.

Korean moms are hella paranoid and always filled with worry for their children... but this mom takes it to the SSJ-hardcore-to-the-max limit. I've been loving Korean movies recently... no, it's not cause I'm Korean. They're expertly structured, artistically vibrant, and extremely immersive. "Mother" continues to keep the Korean movie industry running smoothly. "Mother" staggers slightly due to the lack of a moral or thematic foundation and, contrary to more recent Korean films, slight pacing issues. Yet, these are just minor issues for an deftly crafted thriller with a multiple of riveting, suspenseful scenes. All the actors play their roles superbly, the cinematography is unique, the editing has an unbelievable amount of precision, and the dialogue is simple yet smart. I'm gonna tell ya though, this is a violent movie that exudes a very eerie and disturbing tone. Haven't seen a movie like it. For a movie with a very linear plotline, "Mother" dishes in variety through unpredictability, enthralling "indie-like" scenes that add artistic value, and incredibly tense scenes. Yeah... Hollywood's missing out... "Mother" exceeds on all levels and unlike many Korean movies, leaves viewers with something more then just a story -- it leaves an impression that won't be forgotten for a while.

Slow-burning dark drama that features a fantastic performance by Hye-ja Kim in the title role.

Expected to like this a little more than I did. Was a very long movie, and it seemed to change half way through. It starts off as being about an overprotective mother and her simple son. I liked that angle. Then the son goes to jail over a murder it seems likely he did not commit (or did he...), and suddenly this turns into a murder investigation led by the mother. It does pick up again at the end, but whether or not it was worth sticking with is debatable. This is quite a popular films with a lot of good reviews, so it's possibly just me and the mood I was in when I watched it, but it wasn't quite what i was expecting, and I was a little underwhelmed by it, though I'll admit the acting and filming was very good here.