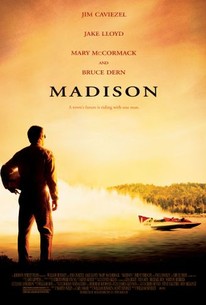 Based upon a true story, Madison is a father-son drama based on the highly publicized efforts in Madison, IN, during the hydroplane racing season of 1971. Jim McCormick (James Caviezel) has left behind his life of hydroplane boat racing to settle down and start a family and take a job as an air-conditioner repairman. Though he tries to embrace his new life, he still longs for his racing days, and the boat has become the town laughing stock. The town has also experienced harsh financial strain and the rich corporate sponsors of Jim's competitors have stolen the spotlight again and again. The town of Madison is suddenly asked to host the prestigious Gold Cup championship, and Jim cannot resist, though the town is far less supportive. Jim rallies the community for support in an attempt to bring the pride back to it, though his wife, Bonnie (Mary McCormack), is eager to move to the big city and out of the doldrums of Madison, and his son, Mike (Jake Lloyd), has become disillusioned with the idea of the boat races and watching the larger contenders win every time. But Jim stubbornly presses on and soon is permitted to play again with the big boys. The film also features veteran actors Bruce Dern, Brent Briscoe, and Paul Dooley.

There is one major difference between the two, however. Hoosiers is a fantastic movie, maybe the best sports-related motion picture ever made; Madison, quite simply, is not.

You've seen a movie that has the exact same scene after scene and the sport's just been different.

A touching, spirited family movie that, in the Rocky tradition, is about a sports challenge that represents the hopes and aspirations of characters with little reason to expect success.

A stubbornly up-with-people schmaltzfest, it's the kind of corn that gives angst a good name.

There isn't a scene, an action or a character that rings true, yet the narrative summary of the events that inspired it is a matter of record.

Madison brings us the news that miracles really can happen, and an apparent case of divine intervention is the only reason this artifact is being dumped into theaters.

It's one of those films that makes me realize just how much I love cinema.

As the clichés mount up, it's easy to see why the film has been waiting for a release since 2001.

It is done with such sincerity and good feeling that I found myself far more interested in the proceedings that I could have possibly expected.

Unembarrassed with its rah-rah populism, the movie is definitely anti-cynicism, and often quite enjoyable in its sincerity.

I grew up near Madison, Indiana, lived there briefly and spent a lot of time there - so this movie is kind of special to me for those reasons. Other than that it's not really very good.