The Madness of King George1994 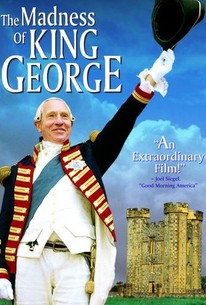 Critics Consensus: Thanks largely to stellar all-around performances from a talented cast, The Madness of King George is a funny, entertaining, and immensely likable adaptation of the eponymous stage production.

Critics Consensus: Thanks largely to stellar all-around performances from a talented cast, The Madness of King George is a funny, entertaining, and immensely likable adaptation of the eponymous stage production.

Critic Consensus: Thanks largely to stellar all-around performances from a talented cast, The Madness of King George is a funny, entertaining, and immensely likable adaptation of the eponymous stage production.

The Madness of King George Photos

Based on Alan Bennett's acclaimed play The Madness of George III, The Madness of King George takes a dark-humored look at the mental decline of King George III of England. The film's story begins nearly three decades into George's reign, in 1788, as the unstable king (Nigel Hawthorne, reprising his stage role) begins to show signs of increasing dementia, from violent fits of foul language to bouts of forgetfulness. This weakness seems like the perfect chance to overthrow the unpopular George, whom many blamed for the loss of the American colonies, in favor of the Prince of Wales (Rupert Everett), but the king's prime minister William Pitt (Julian Wadham) and his wife Queen Charlotte (Helen Mirren) are determined to protect the throne. Doctors are brought in, but the archaic treatments of the time prove of little value. In desperation, they turn to Dr. Willis (Ian Holm), a harsh, unconventional specialist whose unusual methods recall modern psychiatry. Willis struggles to break through to the mad king, treating him with an anger and haughtiness George has never before experienced. Stressing the absurdity of the entire situation, Bennett's witty screenplay emphasizes dry humor over tragedy, even utilizing references to King Lear for comic effect. Hawthorne's fiery yet vulnerable performance received much critical praise, including Best Actor at the British Academy Awards and a nomination for the same at the Oscars. ~ Judd Blaise, Rovi

Rupert Everett
as Prince of Wales

Julian Rhind-Tutt
as Duke of York

Nick Sampson
as Sergeant at Arms

News & Interviews for The Madness of King George

View All The Madness of King George News

Critic Reviews for The Madness of King George

Visually sumptuous, energetic and classy, The Madness of King George is British film theatre at its most seductive.

Hytner's version of Bennett's comic-tragic drama of the tormented king who almost lost his mind confirms that power games, family scandals, and personal intrigues have always been integral to the British Crown, an institution both revered and reviled.

In its own shambling, elliptical way it's an entertaining, memorable movie whose 2 1/2 hours go by without strain.

Hawthorne is by turn outrageous and pathetic and imperious and poignant and very funny.

The thrill of Hawthorne's astounding performance is not something you want to miss.

For those who, like myself, were disappointed in the play, the film contains pleasant surprises, all of them resulting from differences between the two arts.

It's sometimes so loopy that one half-expects Mel Brooks to wander into the frame, muttering, "It's good to be the king."

It's Hawthorne's engaging performance that makes this drama both fun and moving.

Vastly entertaining, with more bite than you expect from a costume drama.

Flawless acting. Hawthorne was robbed of an Oscar. Sorry, but it's true.

So slick, so clever and so incredibly lucid that it neither leads to much in the way of thought, discussion or, unfortunately, repeat viewing.

Respectable actors aside, it's no more than a dryasdust history lesson.

Audience Reviews for The Madness of King George

This film has a top-notch cast and a fascinating true story. The costumes and locations are perfect. I felt as though I had traveled back in time to events in the Age of Enlightenment that may not have been quite so enlightened.

I saw this on DVD. Interesting look at monarchy. It raises questions about WHY monarchy of course. It was produced in 1994 and I think there were a lot of questions around then about WHY the monarchy when you had Prince Charles doing make-work waiting for mum to move aside--still waiting--and Fergie and Diana trying to figure out how to be real women while also being every little girl's fantasy--and Prince Phillip looking stern--and well, it's obviously a defunct institution but the Brits love 'em so who am I--an American, or a Colonist as King George would say--to tell them what to do? They're a colorful lot. This movie also really gets into the power behind the thrown--Pitt, Fox--great depictions and not unlike we're going through in 2012./

"I'm here, here, but I'm not all there." Originally titled The Madness of King George III but the "III" was dropped fearing that American audiences would think it a sequel. Historically fascinating but suffers from hit & miss casting in the supporting roles. Helen Mirren is utterly fantastic, as always. Nigel Hawthorne's performance is Oscar worthy.

The Madness of King George Quotes