Madness of the Heart1949 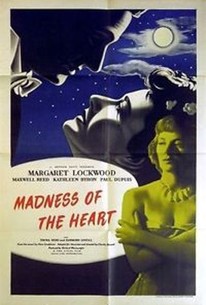 Madness of the Heart Photos

In this melodrama, a London girl falls happily in love with a Frenchman and immediately goes blind. Convinced her affliction is a Divine punishment for her sins, she joins a convent. The good sisters know she does not belong there and gently convince her to leave. Shortly after returning to secular life, the Frenchman marries her and they move to France to live in his parents' manor. There, the poor bride begins feeling like an unwelcome guest and like someone wants her dead, but cannot prove it. She expresses her fears, but no one believes her and after a particularly terrible fight, she miscarries. Feeling unloved by her own husband, the poor woman returns to England. There she undergoes a potentially dangerous but successful operation to restore her sight. Still upset her husband's lack of belief, she returns to France to prove her allegations.

Patricia Cutts
as Girl at bookstall

Betty Blake
as Woman at bookstall

Sam Kydd
as Soldier at Airport

Lionel Gross
as Porter
View All

Critic Reviews for Madness of the Heart

Kind hearts apparently do not, in this case, go with coronets, and Margaret Lockwood has more than blindness to contend with: she plays her part better than the piece warrants.

Audience Reviews for Madness of the Heart

Overwrought meller has a wonderfully evil performance by Kathleen Byron to recommend it but is nothing that hasn't been done many times before.

Madness of the Heart Quotes