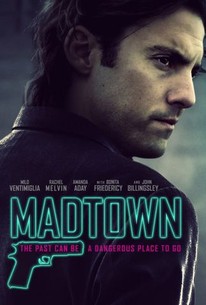 MADTOWN, which made official selection at the Newport Beach Film Festival and the Cleveland International Film Festival, follows a troubled young man, Briggs (Ventimiglia), who flashes back to the demons of his past when his sister is released from her twenty-year prison sentence for the murder of their parents. Briggs must confront his estranged sister and deal with the past, while fighting to protect his future and the new life he has rebuilt for himself.

Cherie McClain
as Principal
View All

A gifted cast and some finely shaded detail add dimension to the low-budget indie "Madtown," an overwrought melodrama that nevertheless remains engaging from start to finish.

There are no featured audience reviews yet. Click the link below to see what others say about Madtown!