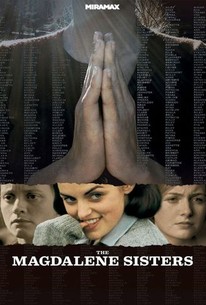 Critics Consensus: A typical women-in-prision film made untypical because it's based on real events.

Critics Consensus: A typical women-in-prision film made untypical because it's based on real events.

Critic Consensus: A typical women-in-prision film made untypical because it's based on real events.

A drama which charts several years in the young lives of four "fallen women" who were rejected by their families and abandoned to the mercy of the Catholic Church in 1960's Ireland. While women's liberation is sweeping the globe, these women are stripped of their liberty and dignity, and they're condemned to indefinite sentences of servitude in The Magdalene Laundries in order to atone for their "sins." The last Magdalene Asylum in Ireland closed in 1996, and only since has the true horror of conditions in these institutions begun to emerge.

Nora-Jane Noone
as Bernadette

News & Interviews for The Magdalene Sisters

View All The Magdalene Sisters News

Critic Reviews for The Magdalene Sisters

This drama about a shocking reality from recent history balances a light touch with searing intensity and a sense of moral outrage.

A deliberately provocative film that triggers the audience's emotions in order to highlight important issues of personal freedom. Amen to that.

You may never look at a nun the same way again.

A grim and unmistakable masterpiece of bleak, black sorrow.

The Magdalene Sisters has the force of an alarm being sounded.

The Magdalene Sisters is an intense watch, but one that allows its central characters a sense of hope and power, even amid the atrocities.

A disturbing, heartbreaking and gripping portrait of religious paranoia manifested through violence.

The movie is an indictment of systems that perpetuate oppression and exploitation by making the administrators believe their every cruel act is justified and by compelling complicity in victims and bystanders.

A damning indictment of the Catholic Church that lingers in the mind long after if ends. Angry, compassionate but never hysterical, this a true cinematic achievement.

This is a riveting piece of drama about a forgotten slice of history, no matter what the esteemed movie critics at the Vatican say about it.

Magdelene proves to be touching, potent, and incredibly human in its emotional complexity.

Audience Reviews for The Magdalene Sisters

Writer/Director Peter Mullan follows up his surreal and blackly humourous Scottish family drama "Orphans" with this hard-hitting account of the agonising and torturous true-story of the abuse of young women from Ireland in the name of religion. In 1960's, young women where incarcerated in a Irish convent, run by the Catholic church, for committing such 'misdeeds' as flirting with boys, becoming pregnant out of wedlock, and being raped. They are physically and psychologically abused by the head nun and her sadistic staff, who are convinced they are doing the Lord's work. Having based his screenplay on actual Magdalene inmates' experiences, Mullan achieves an authenticity of what life was like for the young women that had to endure the injustices, humiliation and brutality of these asylums. At times it's very difficult to stomach, such is the sheer power and uncompromising telling of this harrowing story and it's full of overwhelmingly excellent performances. Geraldine McEwan as Sister Bridget, the head nun, gives one of the most absolute personifications of evil ever commited to the screen and Eileen Walsh is heart-breakingly compelling as the naive, downtrodden and religiously devoted Crispina. Her performance was worthy of so much more recognition than she recieved. Speaking of which, the entire cast and crew deserved more awards attention on it's release. Had this been directed by someone with a higher profile than Mullan and his crew, this film would have been hailed as a masterpiece. As it is, it's had to rely on word-of-mouth to find an audience but this doesn't lessen the effect or superb work by everyone involved here. Mullan's direction is flawless, the cinematography by Nigel Willoughby is stark, and almost de-saturated, adding to the overall feeling of desperation and loneliness of the women and as mentioned, the performances are perfectly pitched from a largely unknown cast. It may be hard for some to accept this behaviour went on but it's even harder to accept that these asylums lasted until 1996, when the last one was finally shut down. A harrowing and emotionally charged drama that while based on fact, is highly subversive. If the Vatican condemns a film on it's release (which it did with this) then there's no doubt that you're in for a hard-hitting film. Painful, provocative and important!

A powerful and unflinching drama from Peter Mullan that will inevitably fascinate yet distress viewers. The film covers an interesting yet terrible period in history, its well directed, engrosses the viewers from start to finish, contains top performances from all the young cast and a fierce portrayal from Geraldine McEwan. Essential viewing!

A brilliantly acted, very down to Earth story depicting realistic activities within the many of the asylums in Ireland during this era. Horrific circumstances that allows women to be treated as prisoners for shaming their families, whilst repenting their sins. The individual stories of each are tales within a tale and are a harsh reality reflected of the time, where pride is thicker than water! Hard hitting British Drama at it?s best.

If you're like me you took one look at the movie poster (or DVD cover) and assumed that The Magdalene Sisters was a sexy Irish comedy or a romantic drama. Nothing could be further from the truth. This is a film that's serious, tragic, and worst of all, true. For many years the Catholic church of Ireland sanctioned 'asylums' for wayward girls called "Magdalene Laundries". They were, in fact, little more than sweat-shops that incarcerated women for such heinous criminal offenses as flirting with boys or 'allowing' themselves to be raped. This film is an indictment of those puritanical institutions that, surprisingly, were still active well into the 1990s.