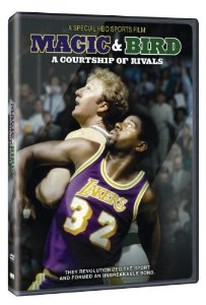 The rivalry between Boston Celtics forward Larry Bird and Los Angeles Lakers point guard/forward Earvin "Magic" Johnson provided hours of highlights and fodder for sports analysts, collected here in Magic & Bird: A Courtship of Rivals. With interviews from the two stars and narration by Liev Schreiber, one of the NBA's most storied on-court matchups is chronicled from Bird and Johnson's first meeting at the 1979 Salt Lake City NCAA Championship when Johnson's Michigan State University team defeated Bird and the Indiana State University Sycamores through their final days on the court together and beyond.

Critic Reviews for Magic and Bird

There are no critic reviews yet for Magic and Bird. Keep checking Rotten Tomatoes for updates!

Audience Reviews for Magic and Bird

There are no featured audience reviews yet. Click the link below to see what others say about Magic and Bird!