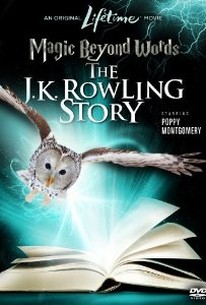 Magic Beyond Words: The J.K. Rowling Story dramatizes the British author s (Poppy Montgomery, Without a Trace) struggle to bring the beloved wizard fantasy of Harry Potter to life as a single mother on welfare and become one of the world s wealthiest women, with more than 400 million copies of her visionary books sold across the globe resulting in a billion-dollar film franchise. The film is an inspiring look at a woman s rise to become one of the most influential writers ever from her humble beginnings as an imaginative young girl and awkward teenager to the devastating loss of her mother and the genesis of the Harry Potter phenomenon in her early twenties. The rags-to-riches tale also follows Rowling s tumultuous first marriage, becoming a mother, her divorce, and the dark days of living on government assistance while publisher after publisher passed on her first novel...before it became an international best-seller and solidified Rowling s rightful place in literary and cultural history.

Critic Reviews for Magic Beyond Words: The JK Rowling Story

The drama of Rowling's life, while powerful to her, seems fairly mild by TV biopic standards.

If you've ever been a single mom and couldn't see the light at the end of the tunnel, this is the perfect movie for you.

Lifetime translated a potentially heartwarming and positive tale into something rife with clichés.

Dull beyond the power of even a mammoth opening weekend for the final Harry Potter film to render interesting.

This journey is a string of moments, all leading to Harry Potter.

Audience Reviews for Magic Beyond Words: The JK Rowling Story

There are no featured audience reviews yet. Click the link below to see what others say about Magic Beyond Words: The JK Rowling Story!