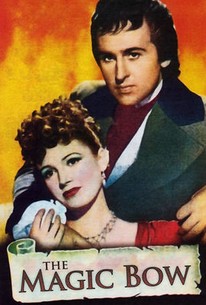 The dazzlingly handsome Stewart Granger is at least physically well cast as the charismatic 18th century violinist Paganini. The fact that the illusion explodes whenever he opens his mouth mattered not at all to Granger's legions of British female fans. Luckily for the screenwriters, Paganini was as celebrated for his many love affairs as for his musical accomplishments, so it wasn't necessary to cook up a romantic plotline from whole cloth. The actual Paganini solos are performed by Yehudi Menuhin, and in this respect (and this respect only) the film is worthwhile. Magic Bow was another guilty pleasure from Gainsborough Productions, England's principal purveyor of bodice-ripping romances. ~ Hal Erickson, Rovi

Critic Reviews for The Magic Bow

Stewart Granger, Phyllis Calvert and the rest of the British cast are considerably better than their material in this undramatic but musically-delightful family film.

The story is merely the vehicle for carrying the magnificent playing of Yehudi Menuhin. Unfortunately, much of the fine music is reduced to very brief excerpts, time and time again a theme being interrupted to fit in with the story.

Audience Reviews for The Magic Bow

The music is fantastic of course but this is a stately static bore. Granger's wig and makeup are particularly awful making him look less like an 18th century musician than a painted rag doll.