Magic in the Moonlight2014 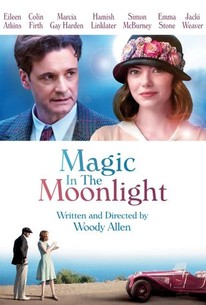 Critics Consensus: While far from a failure, Magic in the Moonlight is too slight to stand with Woody Allen's finest work.

Critics Consensus: While far from a failure, Magic in the Moonlight is too slight to stand with Woody Allen's finest work.

Critic Consensus: While far from a failure, Magic in the Moonlight is too slight to stand with Woody Allen's finest work.

Magic in the Moonlight Photos

Chinese conjuror Wei Ling Soo is the most celebrated magician of his age, but few know that he is the stage persona of Stanley Crawford (Colin Firth), a grouchy and arrogant Englishman with a sky-high opinion of himself and an aversion to phony spiritualists' claims. Persuaded by his friend, Howard Burkan (Simon McBurney), Stanley goes on a mission to the Côte d'Azur mansion of the Catledge family: mother Grace (Jacki Weaver), son Brice (Hamish Linklater), and daughter Caroline (Erica Leerhsen). He presents himself as a businessman named Stanley Taplinger in order to debunk the alluring young clairvoyant Sophie Baker (Emma Stone) who is staying there with her mother (Marcia Gay Harden). Sophie arrived at the Catledge villa at the invitation of Grace, who is convinced that Sophie can help her contact her late husband, and once there, attracted the attention of Brice, who has fallen for her head over heels. What follows is a series of events that are magical in every sense of the word and send the characters reeling. In the end, the biggest trick MAGIC IN THE MOONLIGHT plays is the one that fools us all. (C) Sony Pictures Classics

Jeremy Shamos
as George
View All

News & Interviews for Magic in the Moonlight

New on DVD & Blu-Ray: Teenage Mutant Ninja Turtles, The Maze Runner, The Skeleton Twins, and More
Critics Consensus: Hercules is Mighty Fun
Parental Guidance: Magic in the Moonlight, And So It Goes, Plus Transcendence on DVD

View All Magic in the Moonlight News

Critic Reviews for Magic in the Moonlight

The prolific filmmaker follows up last year's fantastic Blue Jasmine with a lackluster movie that's unfortunately not as enchanting as it sounds.

No kind of chemistry between the two ever arises, making their eventual romance, arrived at through pages of halting dialogue, feel particularly awkward.

A rather lovely cast, including Colin Firth and Emma Stone, is wasted on a story so old-fashioned and repetitive that it feels like Oscar Wilde with a wit lobotomy.

It's an accomplished, stately movie -- unimpassioned but pleasing.

A sweet-natured contrivance; big on whimsy, low on memorability.

A sort of spiritual sequel to the wildly successful Midnight in Paris, Magic in the Moonlight represents everything that's good and bad about late Woody Allen.

Woody Allen's 46th film remains with you after the credits have rolled.

Allen's new film is largely stillborn. With more sadness than anger, one has to report that Magic in the Moonlight is largely devoid of wit, charm or "magic" of any kind.

Despite tackling some of life's big questions this one feels like a trifle.

I liked Magic in the Moonlight on a superficial level and nothing beyond that.

By the time its denouement arrives, the lack of context and development make me forget that I was watching a movie with some discernment. [Full review in Spanish]

Classic romanticism told with the whimsical humor that is Woody Allen.

Debbie Lynn Elias
Behind The Lens
View All Critic Reviews (190)

Audience Reviews for Magic in the Moonlight

The dialogue is painfully expository and it is hard to accept that such a self-centered rationalist would be this easily convinced without asking the most fundamental questions about what he is witnessing. Besides, the plot is too predictable for anyone acquainted with Allen's works.

A miss for Woody. Beautiful looking film with Colin Firth fine in the lead but the usually charming Emma Stone is completely wrong as the supposedly mystical woman in question. Suggesting not an ounce of gossamer glow nor in any way a woman of the 1920's when the film is set she seems nothing but a miscast actress at sea. It doesn't help that she and Firth share zero chemistry on screen.

While most of this film will just go over your head as far as caring about the deep voabulary used to explain characters, "Magic in the Moonlight" is also an endearing film (albeit slow) about how love can change ones perspective on everything. Sure, there is much more under the surface of that notion, but we are talking about a Woody Allen picture here after all. Surprisingly, I bought the chemistry between Emma Stone and Colin Firth, because just after the first act I really felt as though it would have been forced. Is this one of Woddy Allen's most profound works of art? No, but for someone who has had a long string of average movies lately, this one stood out to me. The natural conversations about the world and what it truly is, really got to me. Not everything is all sunshine and rainbows, but the film chooses to stay mostly in the sunshine (figuratively), which I thought was very intriguing. "Magic in the Moonlight" is a very well-made picture with witty performances and a good enough story to warrant the dialogue that I enjoyed. Is this a film I will be remembering for a long time? No, but for the meantime, it was a very pleasant watch.

A magician con artist is tasked to expose a winsome psychic, and sparks fly! Colin Firth is dashingly aloof, and Emma Stone is blissfully light, but they lack chemistry together. Perhaps it's their age difference; perhaps it's their characters' lack of actual getting to know each other. The central question of the movie seems to be about faith. Does a greater power exist, and if so, is Sophie a real psychic? However, these deep questions are forgotten in favor of Woody Allen's canned "opposites attract" romcom plot. The most powerful scene of the movie (and a vulnerable piece of acting from Oscar-winner Firth) is the moment when devout atheist Stanley puts his trust in prayer. He prays for his aunt's recovery, but then he stops abruptly, and I expected him (and Woody for that matter) to transcend type to realize the selfishness of his prayer and instead pray for his aunt's peaceful passing. But no, we get a motivation-less epiphany about Sophie's fraudulent predictions, which is difficult to believe because so much suspense has already been built up around her inexplicable phenomena that the audience is just meant to roll with it, but the movie pulls the rug out from under us in an unmasking that is too deus ex machina.

Magic in the Moonlight Quotes