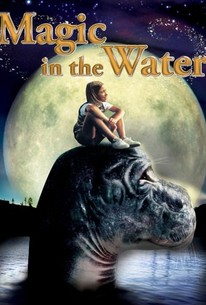 Critics Consensus: There might be Magic in the Water during this family-friendly adventure, but precious little of it ended up on the screen.

Critics Consensus: There might be Magic in the Water during this family-friendly adventure, but precious little of it ended up on the screen.

Critic Consensus: There might be Magic in the Water during this family-friendly adventure, but precious little of it ended up on the screen.

Magic in the Water Photos

Set in beautiful British Columbia, Canada, this magical family tale centers on a divorced radio talk show psychiatrist who has been so immersed in his career that he has neglected his two kids, Ashley and Josh. To rectify the situation, he takes them to a beautiful lakeside cabin in Glenorky, BC, the supposed home of a giant mythological reptilian monster. Though he has ostensibly come to spend time with the kids, the lure of working on his book is too strong and soon he is locked away in the cabin amidst papers, a cellular phone and a lap-top, busily clacking away while the children head out to explore. It is Ashley who first sees the mythical monster. She tells her dad, and of course, he initially disbelieves her, but the girl seems so earnest that he begins to wonder. His investigation of the matter leads him down a magical road to reconciliation with his children and the rediscovery that there is a wonderful life outside of his career. He even manages to find a little love along the way. This film is also known as Glenorky.

Will Sasso
as Shy Young Orderly

Philip Baer
as Boy in Boat

Peter Baer
as Boy in Boat

Elisa Wayne
as Girl in Tutu

Cole Halleran
as Boy on Leash

Critic Reviews for Magic in the Water

On the minus side are a heavy-handed dose of political correctness and a needless flight into dubious whimsy in an already fanciful situation.

If Magic in the Water had been written smarter, both children and adults would have enjoyed it more.

Orky is very concerned with the environment and can repair relationships between parents and children. But Orky cannot save this movie.

Orky isn't shown until near the end, and then only briefly. At first, I thought this was an attempt to build suspense, but after a while, I began to suspect that the high cost of sea-monster footage was the real explanation.

Director Rick Stevenson and co-writer Icel Dobell Massey tell their fanciful story with an appreciable amount of wit and imagination.

The result is a slice of delightful escapism that will enchant children and entertain parents as well.

'Magic in the Water' will probably appeal mostly to viewers who crave unsophisticated family-oriented entertainment, not matter how hokey it is.

A film likely to delight only the youngest moviegoers.

You can probably see this movie without doing any major damage, but you and yours will have much more fun reading together from the collected works of Dr. Seuss.

Audience Reviews for Magic in the Water

Very good made-for-tv film from the mid-90s. I've always been fascinated by the Loch Ness Monster, and this reminded me of that, with a great family movie tied into it.

Magic in the Water Quotes