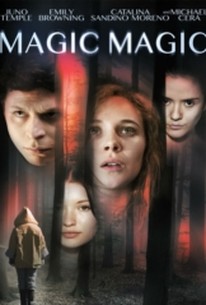 A vacationing insomniac loses the ability to distinguish dreams from reality while traveling the Chilean countryside with a group of adventurers that includes her best friend and an enigmatic American in this downbeat saga. Though it came to the U.S. billed as a thriller or a horror picture, Chilean director Sebastian Silva's Magic Magic is more aptly described as a dark psychological drama with tense overtones. Juno Temple stars as Alicia - an emotionally fragile young woman in her early 20s with a murky history. She joins her cousin Sarah (Emily Browning), Sarah's boyfriend Agustín (Agustín Silva), the couple's eccentric friend Brink (Michael Cera) and Agustín's sister Barbara (Catalina Sandina Moreno) for a retreat in the countryside, but from the beginning, things don't go as planned. In the days that follow, more tension erupts between Alicia and the other members of the group, particularly Brink, who displays extreme anti-social tendencies and grows fond of malevolently pushing the girl's buttons. After Sarah returns, all hell threatens to break loose: Alicia is accosted by a local dog that attempts to copulate with her leg; Brink and Agustín play a dangerous game that threatens to cause Alicia grave physical harm, and it becomes increasingly apparent, throughout, that Alicia is now teetering on the brink of a full-scale mental breakdown, which terrifies the others. ~ Nathan Southern, Rovi

Magic Magic's odd denouement is a dramatic curveball that smacks the viewer square in the face.

Silva, like all good film-makers, is a magician. But thanks to the last-minute fumbling, we're left with a broken spell.

Magic Magic is skewered on the horns of a dilemma, uncertain whether it's a horror film or a psychological drama -- and it doesn't work especially well as either.

Juno Temple is sensational in this assured psychological thriller from Sebastián Silva.

Another satisfyingly nasty and well-controlled work from Silva.

Its spell will stay with you, creepy crawling down your spine.

With every intention to be a tale of cerebral turmoil, this endless slew of catechisms is less of a high-brow assessment of the psyche and more of a monobrowed headache. Driving this sallow snore, however, is a score of budding talent.

Magic Magic is a complex film. While not much happens in the plot, it is clear that the film has a lot to say.

It's refreshing to see something with a dramatic heart beating beneath its discomfiting exterior.

The plaudits rest with [Juno] Temple, whose white-faced panic carries her over plot weaknesses through sheer force of will.

It's a big load of much-ado-about-nothing dressed up in writer- director Sebastian Silva's arty movements.

The title here is what I quibble against, leading unsuspecting audience-types like myself to suspect supernatural elements in this story when in truth there are none. THERE ARE NONE. A young woman on vacation loses her true north and the people with her wonder what to do about it. Annnnd ... roll credits. "What?! That's it?!" Yep. That's it.

I think this is marketed badly. It's not a thriller at all - it's about mental illness. Juno temple and Emily Browning do well here. The rest of the cast are irritating. The movie moves slowly and the ending isn't really what you would want to see either. I liked it, but it's not entirely engaging and I wouldn't watch it again.

A shy and emotionally fragile American girl is trapped with four strangers in a vacation home in Chile when her friend ditches her to deal with personal issues. Well acted, with a decent atmosphere of subtle paranoia; unfortunately, the script is missing the narrative hooks to draw you into its REPULSION-lite scenario.