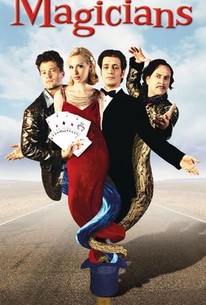 A would-be illusionist tries to create some magic for himself and his friends in this comic road movie. Max (Til Schweiger) is a struggling professional magician who has a great act, once you get past the fact that most of his tricks don't work very well. One day, Max meets Hugo (Fabrizio Bentivoglio), a thief who boasts all the skill and expertise in his line of work that Max lacks in prestidigitation. Max is convinced he and Hugo would be an unbeatable combination in Las Vegas, so Hugo steals a van and they hit the road for Nevada, after convincing pretty waitress Lydia (Claire Forlani) to tag along as Max's assistant and Hugo's potential significant other. When the trio hits Las Vegas, they encounter Milo (Alan Arkin), a longtime magician and manager who thinks Max has the right stuff to be a success -- until he sees him perform. Magicians was directed by James Merendino, who previously directed the independent cult hit SLC Punk.

Til Schweiger
as Max

There are no critic reviews yet for Magicians. Keep checking Rotten Tomatoes for updates!

There are no featured reviews for Magicians at this time.