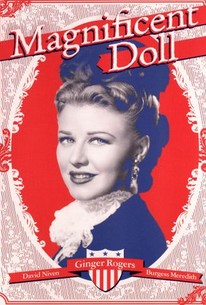 Director Frank Borzage and star Ginger Rogers both came acropper in the lavish but dull historical biopic Magnificent Doll. The usually ebullient Rogers seems encased in wax as Dolly Madison, first lady of the United States in the early 19th century. The story begins as young Washington socialite Dolly Payne, previously and unhappily wed to one John Todd (Horace McNally), can't make up her mind romantically between idealistic politician James Madison (Burgess Meredith) and firebrand Aaron Burr (David Niven). Burr solves that problem when he flees the country after killing Alexander Hamilton in a duel, leaving the field clear for Madison. What should have been the film's highlight, Dolly's rescue of the Declaration of Independence and the Constitution during the 1812 burning of Washington, is treated as a throwaway. Told in flashback, the film ends just before Madison's ascendancy to the White House, with Dolly chastely charming the current chief executive Thomas Jefferson (Grandon Rhodes). Magnificent Doll is anything but .

Jack Ingram
as Lane, the Courier

Lee Phelps
as Hatch, a Bettor

Eddy Waller
as Arthur, the Coachman

Stanley Price
as Man at Platform

Ethan Laidlaw
as Sanders, a Soldier

Dick Dickinson
as Man Who Falls

Grace Cunard
as Woman with Baby

Brandon Hurst
as Brown
View All

There are no critic reviews yet for Magnificent Doll. Keep checking Rotten Tomatoes for updates!

There are no featured audience reviews yet. Click the link below to see what others say about Magnificent Doll!