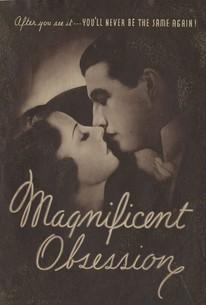 A man who has ruined a woman's life attempts to make good on his debt to her (and his conscience) in this sudsy drama based on a best-selling novel by Lloyd C. Douglas. Bobby Merrick (Robert Taylor) is an alcoholic ne'er-do-well whose recklessness causes the death of Dr. Hudson, a respected physician. Helen Hudson (Irene Dunne), the doctor's widow, turns away from Merrick's apology, only to walk into traffic. She's struck by a car and blinded. Shaken by the tragic events, Merrick gives up alcohol and begins studying to become a doctor and right the wrong he's done to Helen. As he begins spending time at the family's estate through a mutual friend, Helen grows fond of his frequent visits, and they begin to fall in love. However, when Helen learns that Merrick is responsible for her husband's death and her own accident, she moves away to a place where he cannot find her. In time, Merrick becomes a gifted eye surgeon, and he learns that he could restore Helen's sight with a delicate and dangerous operation that he has never performed before. Magnificent Obsession was a box-office success that spawned a 1954 remake directed by Douglas Sirk and starring Rock Hudson and Jane Wyman.

Inez Courtney
as May

Leah Winslow
as Woman on Boat

Ethel Sykes
as Woman on Boat

Sherry Hall
as Man on Boat

Allen Connor
as Man on Boat

William Worthington
as Man on Boat

Louis LaVoie
as Man on Boat

Sumner Getchell
as Jimmy
View All

With its metaphysical theme of godliness and faith, the spiritual background of Magnificent is magnificent.

It's a long film, slow In tempo, but is beautifully directed, acted and photographed.

The wonder of this picture is how the women will weep. And weep. Otherwise it's as smooth as that superb butler, Arthur Treacher, who is in the cast.

If you can really believe in the unaccountable way people act in this picture it will probably make you cry. It was made with that idea in mind.

There are no featured audience reviews yet. Click the link below to see what others say about Magnificent Obsession!