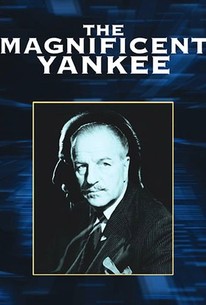 Louis Calhern repeats his Broadway role as Chief Justice Oliver Wendell Holmes in this 1950 cinemazation of Emmet Lavery's stage play The Magnificent Yankee. The film is for the most part confined to the Holmes home in Washington, where the good gray judge parries affectionately with his level-headed wife Fanny (Ann Harding). A steady stream of historical personages parade through the Holmes manse, including jurist Louis Brandeis (Eduard Franz) and novelist Owen Wister (Philip Ober). The death of his wife devastates Holmes, but only briefly; he ends up serving his country for nearly forty years. The British title of Magnificent Yankee was The Man With Thirty Sons, a somewhat misleading reference to the Harvard Law graduates whom Oliver Wendell Holmes sponsored. Also available on videocassette is a 1965 TV production of Magnificent Yankee, starring Alfred Lunt and Lynn Fontanne. ~ Hal Erickson, Rovi

Robert Board
as Secretary

Critic Reviews for The Magnificent Yankee

The Magnificent Yankee is a splendid contribution to American history.

The theatrical Calhern mauls the process of growing old into a picturesque joke of rheumatism, fatigue, diminishing powers.

Low key near-documentary biopic, with interesting sidelights in US history and culture.

So inoffensive and so insignificant, it makes you wonder why a film version of Emmet Lavery's play was either desired or delivered...there's just no apparent motive.

Audience Reviews for The Magnificent Yankee

Very enjoyable bio-pic with a light touch to the material a great help from making it seem like a history lesson. Louis Calhern is simply great in the title role. He and Ann Harding have a wonderful easy camaraderie as Holmes and his wife making it believable that they are a long time married couple.