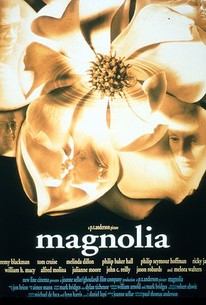 Critics Consensus: Magnolia is an ambitious, lengthy work that ultimately succeeds due to interesting stories and excellent ensemble performances.

Critics Consensus: Magnolia is an ambitious, lengthy work that ultimately succeeds due to interesting stories and excellent ensemble performances.

Critic Consensus: Magnolia is an ambitious, lengthy work that ultimately succeeds due to interesting stories and excellent ensemble performances.

An intriguing and entertaining study in characters going through varying levels of crisis and introspection. This psychological drama leads you in several different directions, weaving and intersecting various subplots and characters, from a brilliant Tom Cruise, as a self-proclaimed pied-piper, to a child forced to go on a TV game show and the pressures he faces from a ruthless father.

Veronica Hart
as Dentist Nurse No. 1

Melissa Spell
as Dentist Nurse No. 2

Jake Cross
as Pedestrian No. 1

Charlie Scott
as Pedestrian No. 2

Neil Pepe
as Officer No. 1

Scott Burkett
as WDKK Page No. 1

Amy Brown
as WDKK Page No. 2

Craig Kvinsland
as Brad The Bartender

Matt Gerald
as Officer No. 2

Steven Bush
as Paramedic No. 1

Mike Massa
as Paramedic No. 2

Dale Gibson
as Paramedic No. 3

Though I couldn't really make heads or tails of this 1999 movie, I found it interesting.

A decade after its release, P.T. Anderson's emotionally epic Magnolia gets the glorious Blu-ray treatment it deserves. This Altman-esque mosaic follows several disparate L.A. citizens on one rainy day, as they navigate through mistakes and torrenti

What this film may have needed to get on its feet is some honest-to-goodness violence.

One of the most enthralling and exhilarating American movies in ages.

All the work is top-notch.

Magnolia is unlike anything that Anderson has produced before or since and as such, a vital watch for anyone claiming to be a fan of the director's work.

Something ineffable in Hoffman's mannerisms, in the way he listens, expresses more than just patience but warmth.

Cruise's performance as Mackey is really fantastic, especially when he is at his most vulnerable. Cruise is just one example of the fantastic performances in the film. There isn't any weak link that I can point to in the impressive cast list.

There is no film ever that has made me think and made me feel and made me question like Magnolia.

We're all walk-on characters in the movies of other people's lives, and that's what Magnolia is, a series of short films that all have a thread tying them together.

The sprawling, messy, brilliant, exhausting, miraculous Magnolia-Paul Thomas Anderson's third film-is a mosaic of Los Angeles at the turn of the century.

Magnolia is a very good film by director Paul Thomas Anderson. However I don't believe it is his best like so many critics have pointed out. Anderson would hone his craft in his future work, but with Magnolia we get to see a director creating something unique. Anderson has always been one of the finer directors who are able to craft quality films with great casts of talented actors. Magnolia is a sweeping movie that intertwines the lives of different people into a powerful story. I really loved the film, but I just don't feel that it is Thomas Anderson's best. He would later make the far superior Boogie Nights and There Will Be Blood. But Magnolia is a fine film that should appeal to viewers looking for a well directed picture that tells a good story. Is it the sweeping masterpiece that viewers have claimed it to be? No, it isn't, but it is worth seeing, and Paul Thomas Anderson's direction is wonderful and he tells an interesting story that is dark and intense. A theme that seems to pop out constantly throughout the film is finding happiness and hope. Magnolia draws its strength from its captivating performances from the cast, and each brings something wonderful to the screen. Although not perfect, Magnolia is a well executed picture that tells a solid story. This is a must see film for fans of the director, and it is a well paced film that you soon won't forget. The cast is what makes this one overcome its shortcomings, and the best actors here that have impressed me are Julianne Moore, John C. Reilley and Phillip Seymour Hoffman. I liked Tom Cruise, but I simply thought he was a bit overdoing it in his performance. Magnolia is worth seeing, but like I previously stated, Anderson would later mature as a director with more interesting films that really pushed the envelope even further.

A realist and surrealist ambitious work by P.T., Magnolia it's the Short Cuts from the end of 90's and a more serious version of Happiness.

Claudia Wilson Gator: I'll tell you everything, and you tell me everything, and maybe we can get through all the piss and shit and lies that kill other people.  "Things fall down. People look up. And when it rains, it pours." Magnolia is a good example for why Paul Thomas Anderson is one of the best filmmakers around. He's yet to make a bad movie, and a lot of the time, at the end of watching one of his films, I am left stunned. That's the case with Magnolia, maybe more than any other of his great movies. This a beautiful, sometimes funny, sometimes sad, film. We watch characters and their personal lives intersect. At first, we don't know how these different stories relate, but slowly Anderson brings them together. You know a movie is amazing when just over 3 hours of runtime feels quick. We see the lives of different people intersect and the movie comes to an unforgettable end. The people who's lives we see are a child on a gameshow, a gameshow host that just found out he has cancer, the daughter of the gameshow host is a cocaine addict, and a cop. Also there is a dying old man, his much younger wife, a caregiver, and a guy who teaches men how to fuck any woman they want to.  This is an extremely emotional film and there are a wide array of subjects touched in Anderson's amazing script. Addiction, guilt, forgiveness, and love happen to be some of the biggest. Everything is handled with such care, that every single thing Anderson is trying to present comes across in a clear and precise way, but without being too in your face obvious.  Magnolia is an absolute masterpiece. Its length may be a turn off for some people, but it is a film worth sitting through. There's nothing hard about watching it either. I was never bored and for a movie that runs 3 hours; that is a rarity. This is visionary filmmaking from one of the best around right now. There's a huge cast with big names like Tom Cruise, Philip Seymour Hoffman, Julianne Moore, Jason Robards, Philip Baker Hall, William H. Macy, and John C. Reilly. All of them, plus a variety of others give flawless performances. Cruise, Macy, and Reilly are my standouts. I don't care what your opinion of Tom Cruise is; his performance in this is ridiculously good. Like every PTA film, this is a must watch. Anderson calls it his best film and who am I to disagree with him. There Will Be Blood, Hard Eight, Boogie Nights, Punch Drunk Love; they're all great. Punch Drunk Love is one of my absolute favorite movies ever. There Will Be Blood and Boogie Nights, both masterpieces. But Magnolia is a movie that is just something else entirely. Describing what that is, is just about impossible.