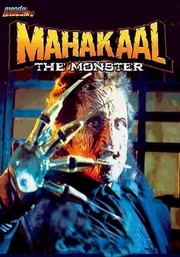 Matt H
½ November 10, 2010
Oh god! This movie is the very definition of awful! It showed promise as a "so bad it's good" film during the first half hour, but the remaining 2 HOURS are mind numbingly terrible! This is an endurance test of the senses. Skip!

Kevin B
½ June 6, 2010
Freddy Krueger--Bollywood-style! Some set pieces are lifted directly from the first two Nightmare on Elm Street films, some have new twists (like multiple gloves, or cobras coming out of the walls), a couple of gags are borrowed from other 80s films (Evil Dead 2, Day of the Dead), while the remaining elements are pure Ramsay Brothers over-the-top mayhem!

May 6, 2010
the one nightmare on elm street film i haven't seen. the indian one

Torstein K
½ January 3, 2010
Mahakaal (The Monster) is an indian take/ripoff of the Nightmare on Elm Street Movie.

The movie stars the quite beautiful Archana Puran Singh as Anita who gets tormented by the evil demon Shakaal, who was buried alive by her father after he had killed sacrificed several children, one being Anita's sister. Shakaal attacks Anita and her closest ones throughout the movie. Anita and her gang trives to avoid him by going on field trips and by doing a few musical numbers where they sing and dance.

The movie is made by the Ramsay brothers who might have the "honour" of being the horror kings of India. It's actually a quite decent movie visually with some colorful and creepy looking scenes. The creepyness goes quickly away however thanks to alot of comic reliefs (and i mean ALOT) and effects which are a little to simple and not so effective. They also rip off the famous soundbits from the american Freddy movies which is a good addition to this one. It also rips off a scene from Day of the Dead and a good murder scene from Nightmare on Elm Street Part III.

I wish the movie had been shorter though. Running a little over to hours is way to long for a movie like this. And there is plenty of scenes which could have been cut out. Everything including the "comic relief guy" played by Johnny Lever would have been nice since he isn't funny or have anything to add to this movie. I guess that would have made the movie 20 minutes shorter and also a much better experience. Take away the subplot with the bad dude who wants Anita aswell and you got a movie that is about 80 minutes long which would be an even bigger improvement. If others feel like me then I'm sure we'll see some fanedits in the future.

There's also a problem with Hindu-Freddy. He does not speak (although he laughs alot) or really do anything very frightening. Freddy's charisma in the american movies is one of it's biggest assets and I'm quite suprised the Ramseys didn't use that in this one. The mullet on Hindu-Freddy however gives him a little pluss.

The movie was actually started on in 1988, but was put on hold when another indian take on the Freddy movies came along called Khooni Murdaa.

Although it has it's fun parts and funny dance numbers I'd only recommend it to the ones who are curious and want to laugh at a Freddy ripoff movie. See it for the nice visual nightmare scenes and try to ignore Johnny Lever and enjoy Mahakaal.

The movie is available on a Mondo Macabre dvd which was released in the summer of '09. Support Mondo Macabre who continues to put out weird and unknown asian cult movies!