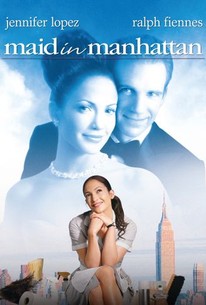 Critics Consensus: Too blandly generic, Maid in Manhattan also suffers from a lack of chemistry between Lopez and Fiennes.

Critics Consensus: Too blandly generic, Maid in Manhattan also suffers from a lack of chemistry between Lopez and Fiennes.

Critic Consensus: Too blandly generic, Maid in Manhattan also suffers from a lack of chemistry between Lopez and Fiennes.

Can a wealthy Republican politician find happiness with a chambermaid from the Bronx? One man is about to find out, though he hardly realizes it at first, in this romantic comedy from director Wayne Wang. Marisa Ventura (Jennifer Lopez) is a single mother who is raising her gifted but under-confident son Ty (Tyler Garcia Posey) on her own, with some help from her mother Veronica (Priscilla Lopez), after divorcing her husband. Marisa works as a housekeeper at the exclusive Beresford Hotel in Manhattan, where her boss Paula Burns (Frances Conroy) and chief butler Lionel Bloch (Bob Hoskins) urge Marisa and her best friend and fellow maid Stephanie (Marissa Matrone) to be as efficient and inconspicuous as possible. One day, while cleaning the room of noted socialite Caroline Lane (Natasha Richardson), Stephanie spies a beautiful designer gown and dares Marisa to try it on; against her better judgment, she does, and while all dolled up, she bumps into Christopher Marshall (Ralph Fiennes), a wealthy and well-bred bachelor who is running for the Senate. Immediately charmed, Chris asks Marisa to join him for a walk in Central Park, assuming she's the blue-blooded Caroline. Marisa manages to join Chris for the afternoon, with Ty in tow, and Chris finds himself quite taken with Marisa's beauty and down-to-earth personality, as well as Ty's precocious interest in politics. Chris later calls Caroline's room to set up a lunch date, but soon discovers the stuffy Ms. Lane is not the woman he met before. Marisa is also attracted to Chris, but while her friends encourage her to pursue a romance, Veronica believes her daughter is asking for trouble by trying to win a man so far out of her social strata. The supporting cast also includes Stanley Tucci and Amy Sedaris.

Hillary B. Smith
as Mrs. Lefferts

Rufus Thomas
as Rufus the Dog
View All

News & Interviews for Maid in Manhattan

View All Maid in Manhattan News

Critic Reviews for Maid in Manhattan

Some of the dialogue seems to have suspiciously sprung out of a corny Deepak Chopra self-help manual.

Fiennes is at a disadvantage, an actor, not a comedian... Lopez is a perfectly efficient comedienne. But mixed together, they're a few retorts short of a chemistry lesson.

Undeniably pleasing if not particularly memorable.

Talented individuals labour over the contrivances in this lightweight romance, and if the result's fluff, at least it's painless.

The plotting is pedestrian at best, you know where it is going from the first frame and there isn't anything going on that should hold your attention for any more than a few seconds.

The rags-to-riches plot should keep hopeless romantics happy, but you just can't help wondering what Hugh Grant, Sandra Bullock and a team of decent joke writers might have achieved with this one.

The embarrassing lack of chemistry between its stars aside, there is nothing in this romantic comedy slush that will make hearts beat faster or smiles curl upwards.

This maid is a near miss. Still, there's enough of JLo for her fans to like the film.

for the chicks who like chick flicks, this will be a great film

So routine that just about everyone involved looks bored.

When we catch ourselves sighing at the end, we get mad that we've fallen for this same old formula all over again. But mad in a nice way.

Audience Reviews for Maid in Manhattan

This is an enjoyable sunday afternoon movie! Its light hearted cute and amusing, sends a message as well. Enjoyable.

Actually not bad. There's no goofy, embarrassing hijinx like in other romantic comedies. The mistaken identity plot is played straight. The socioeconomic commentary is adequate for what is primarily a love story, and I like how Marisa's son gets to build a bond with his mother's suitor too. There is also no given that Chris and Marisa live happily ever after. The magazine covers in the credits say, "One year and still going strong." Nice touch, movie.

An ok Rom-Com with a good cast line up. The story is about love crossing a social, class divide. It's very similar in ways to Pretty Woman and more so Notting Hill....with a touch of Cinderella. Far from original, but quite watchable, there are far worse ones out there!