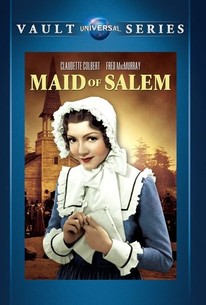 Claudette Colbert is a young freethinking woman living in Salem, Massachusetts during the notorious 17th century "witch trials". Colbert falls in love with adventurer Fred MacMurray, causing no end of scandal with the Puritan townsfolk. A hateful little girl (Bonita Granville) pretends to be "possessed", thereby convincing the Salemites that Claudette is a witch. Tried and convicted of sorcery, the poor girl is sent to be burned at the stake, but is rescued in the nick of time by MacMurray, who convinces the townsfolk that they've been the victim of a hoax. Maid of Salem earned a footnote in entertainment history in 1937 when it was booed off the screen of New York's Paramount theatre by fans who wanted to see the evening's real attraction--a performance by Benny Goodman and his orchestra.

Critic Reviews for Maid of Salem

Maid of Salem is a decidedly worthwhile film, both as history lesson and as object lesson, and shouldn't be missed.

Lloyd adds very cleverly little details about witchcraft, so that when conflict erupts and fear takes over the population, all these elements surface, spreading and turning a drama into an almost terrifying film. [Full Review in Spanish]

Audience Reviews for Maid of Salem

Early Hollywood version of the Salem witch trials isn't bad but the miscast leads hurt the overall film. Both Colbert and MacMurray were expert at drawing room comedies and contemporary dramas but at sea in a historical setting. Bonita Granville is properly hateful as the spiteful girl who starts the panic.