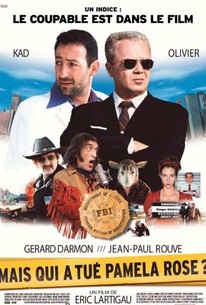 French filmmaker Eric Lartigau directs the anarchic buddy comedy Bullit and Riper, originally released as Mais qui a tue Pamela Rose? French comedic television stars Kad Merad and Olivier Barroux are both the protagonists and the screenwriters. As a parody of Hollywood cop films, the story is set somewhere in the American Midwest as fabricated by the French. After losing his regular partner, FBI agent Richard Bullit (Merad) gets assigned to the book-learned cop Riper (Barroux) to investigate the death of a stripper. American movie stereotypes abound, such as shock jock Phil Canon (Gérard Darmon) and sheriff Steve Marley (Jean-Paul Rouve).

There are no critic reviews yet for Mais qui a tué Pamela Rose?. Keep checking Rotten Tomatoes for updates!

There are no featured reviews for Mais qui a tué Pamela Rose? at this time.