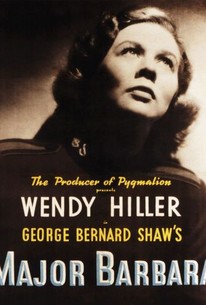 George Bernard Shaw's satiric comedy about wealth and poverty is brought to the screen with wonderful performances by Rex Harrison and Wendy Hiller. Hiller plays Major Barbara Undershaft, a major in the Salvation Army who is also a socialist and stridently attacks capitalists -- in particular her father Andrew (Robert Morley), the head of a munitions plant. In love with Barbara is the young Greek scholar Adolphus Cusins (Rex Harrison), whose attentions go unreturned since Barbara spends all her time on her crusade against wealth. To show up his daughter, Andrew donates 50,000 pounds to the Salvation Army which, to Barbara's horror, the Army's general (Sybil Thorndike) happily accepts. Barbara, in protest, quits her post and it is left to Adolphus to take her on a tour of her father's munitions plant and prove to her the benefits of capitalism.

Sybil Thorndike
as The General

Mary Morris
as A Girl

Edward Rigby
as Man on Quayside

A bit theatrical in places, which is not surprising when you consider its provenance but it suffers for it.

The result is a cinema treat.

Adapted from an old Shaw play, circa 1905, it still carries the lightning thrusts of Shavian caustic satire at any and all levels.

There is plenty to relish, notably Newton and Morley hamming it up (as, respectively, the rumbustious Bill Walker and the overbearing tycoon), and Deborah Kerr in her debut; but it does tend to just sit there.

To call it a manifest triumph would be arrant stinginess with words.

Gabriel Pascal has definitely triumphed as a producer and director, in every field, with the enthusiastic and determined cooperation of Bernard Shaw. [Full review in Spanish]

Pascal's screen version of Bernard Shaw's 1905 satire about socialism and capitalism is too theatrical, but the dialogue is witty and the performances by Rex Harrison and Wendy Hiller superb.

... preserves the social debate and witty dialogue of the play and succeeds on the personality brought to the screen by a top-notch cast.

There are no featured audience reviews yet. Click the link below to see what others say about Major Barbara!