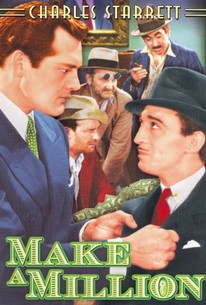 Make a Million stars Charles Starrett in one of his last non-western roles, as idealistic college professor Jones. Because of his radical "share the wealth" theories, Jones is fired on the say-so of banker Corning (Guy Usher). Seeking a new source of income, our hero turns to panhandling, and before long he's raking in more bucks than he'd ever done as a teacher! Through a series of plot twists that would put Dickens to shame (among them a highly suspicious nationwide lottery and a chain-letter racket), Jones emerges as a millionaire at film's end, winning the hand of Corning's daughter Irene (Pauline Brooks). One of the screwiest of the screwball comedies of the 1930s, Make a Million deserves to be better known.

Critic Reviews for Make a Million

There are no critic reviews yet for Make a Million. Keep checking Rotten Tomatoes for updates!

There are no featured reviews for Make a Million at this time.