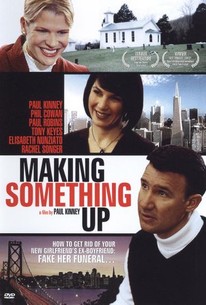 An anal retentive author of children's books wrestles with personal significance and professional recognition while falling for an unemployed single mom whose old beau won't let her go. Jack Payne (Paul Kinney) used to be successful, but these days his career has hit the skids. Fed up with his overbearing book editor/fiancée Amanda (Elisabeth Nunziato), Jack is pondering his career when he crosses paths with single mom Jennifer (Rachel Songer), who's out of work and trying to break away from a bad relationship. Jennifer's ex just isn't willing to accept the fact that she's decided to move on, and in order to get the message across Jack recruits his friends to stage a fake funeral with her starring as the dearly departed. Unfortunately on the day of the funeral, not everything goes according to plan.

Critic Reviews for Making Something Up

There are no critic reviews yet for Making Something Up. Keep checking Rotten Tomatoes for updates!

There are no featured reviews for Making Something Up at this time.

Making Something Up Quotes